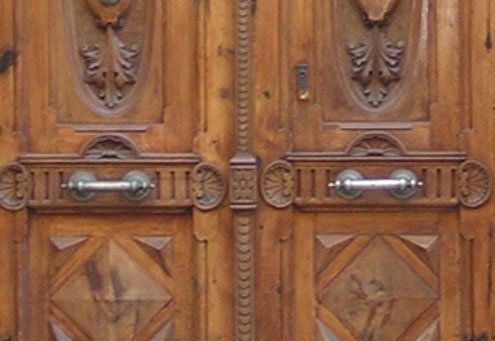 Sometimes you have to lock people out...
T

hey say that you can tell you’re getting old when all the policemen start looking younger than you do. That may be, but I have another definition to add. In my view, the key moment of transition between youth and adulthood is when you start hiring domestic help.

Paying someone to clean your home or look after your children is a grown up’s game, and a very fraught business it is too. In the England of my parents’ generation, no one but the swankiest families had staff, as they were quaintly known. The exception was the occasional exotic household who took on a Swedish au pair, an arrangement that almost always ended in trouble. These days, wherever you live, it’s hard to manage without someone to help if you work and have children, and want some kind of a life as well. And of course, the ready supply of immigrants in just about any community from London to Livorno makes it all so much easier, salving consciences and sparing the embarrassment of having to ask someone from your own country to clean your bathroom and do your ironing.

In Rome, that almost inevitably means “finding a Filippino,” an obnoxious expression if ever there was one. We had a girl for more than 10 years who came to clean twice a week and was just about the fastest thing I have ever seen on two legs. She was so competent that I seriously considered staying in Rome long after we had decided it would make sense to move to Spoleto. This human whirlwind had just one defect. She would take off periodically, back to the Philippines, once to have her baby — she didn’t trust Italian hospitals, a fact which creased me up — and afterwards, less amusingly, to visit her infant daughter whom she left behind with her own mother and saw just once a year.

Every time she left, she obligingly arranged for someone to take her place, but it always turned out to be a disaster. Once she sent a young married Filippino couple, who lived in at their respective employers during the week and met to clean our place at weekends when we were out. My husband was convinced they spent most of the time bonking in our bed, and I fear he may have been right. Even worse was our girl’s own husband, who was as slow and clumsy as his wife was fast and agile. Now I have never been one to run my finger around lampshades, as many an Italian signora will do, but somehow, after he had left, the apartment looked even dirtier than before, and when he presented the pathetically small pile of clothes that he had managed to iron, my husband agreed that even I could have done a better job.

Now that we live in Spoleto, there are no Filipinos, so the choice is between “finding a Romanian,” a Ukrainian, or, as in our case, an Albanian. My decision to hire an Albanian girl has certainly not gone down well with the Italians I know.

“You must need your head read,” said one friend, sucking in her breath in horror. “Get rid of her fast and change the locks.” It’s true: the Albanians in these parts are a shady-looking bunch, with a penchant for big BMWs and loud jewelery. But I have taken a liking to our girl, and I regularly leave her the keys to our flat.

Not that the relationship got off to a brilliant start when we first met a few months ago. She made me come and pick her up from the bar in the piazza as she was terrified of being there on her own. Then, when I left to pick up my children from school and told her my husband would be back soon, she flew into a panic and announced she would have to leave. She couldn’t possibly stay alone with him, she told me, as he would almost certainly rape her. It took all my powers of diplomacy to calm her down, biting my lip to stop me from making the unkind but obvious remark that the fact that she was hugely overweight and looked like the back end of a bus would probably keep her safe from the clutches of even the most desperate of men.

Back in England, my brother and his wife have taken a different approach to the home help conundrum, opting for an au pair from Poland, of which there is now an endless supply, thanks to the expansion of the European Union. It hasn’t been a resounding success, culminating in the first one leaving after just a few months, amid accusations that she was “too sulky.” In smart London households au pairs are confined to their rooms after about 7 p.m. and forced to eat with the children.

My own favorite au pair story concerns another Polish girl, who was being treated abysmally by her snooty London employer. “I’ll f*** your husband,” muttered the girl under her breath as she listened to the umpteenth tirade from her impossible mistress. And that’s exactly what she did.