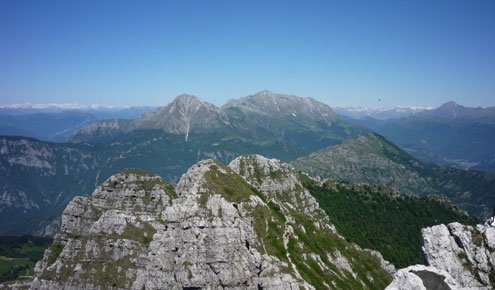 n those rare clear days when the sky is blue and I round the corner to my home in north Milan, Resegone beckons. Nine of its dozen, steep, dark gray, dolomite “denti” stand out against the azure background. At 1,875 meters, it’s not a high mountain, but it is distinctive with its razor-like ridges — hence, the name “Big Saw.” I call it “Old Sawtooth.”

Resegone straddles the city provinces of Lecco and Bergamo. From the Bergamasque valleys of Imagna and Taleggio, it appears much softer and green, but on the Lecchese side, with its rough teeth and harsh majesty, the raw mountain calls out to Milan and the Brianza region. Along with Lake Como, it is a symbol of Lombardy. If there is one mountain a Milanese can identify, it’s Resegone. It’s etched in the heart of many a Lombardo.

So much so that Alessandro Manzoni’s 19th century novel set in 1628, “I promessi Sposi” (“The Betrothed”), begins with the image of Resegone. Of the several mentions in the book, my favorite is when the mountain itself intervenes to guide Renzo, the future bridegroom, as he flees from Spanish-dominated Milan to safety and freedom in Bergamo, then part of the Venetian Republic. Luckily, he didn’t encounter fog.

On a bright, June day, a breeze has polished Milan’s air. With my husband Marino, I drive north on the SS36 towards Lecco, Resegone leading the way. We follow directions for Viale Nuova Valsassina and the town of Ballabio. At the roundabout in Ballabio, we take exit 3 onto provincial road SP62 and, after five minutes, turn left onto SP63, Via per Morterone. It’s a winding, 12-kilometer drive to Morterone. With just 31 year-round inhabitants and a city hall, it’s the smallest comune in Italy. Just before Morterone, at Forcella d’Olina (1,170-meters), we park near a small tunnel. Our trail starts here. We prepare for a 700-meter climb.

The path is on the right. We walk up and down in woods of alder and beech. Hanging yellow clusters of poisonous laburnum flowers peek through the leaves. After 20 minutes, we arrive at a cement structure and take the trail on the right past a makeshift hunters’ blind. We begin to climb. The trail is marked “17” and “DOL” (Dorsale Orobica Lariana) with red, white and yellow stripes. We keep to the right and pay attention to the surroundings. We will return this way and there are numerous paths from Morterone that crisscross here. The trail is well-trodden and signed. After 30 minutes, we arrive at Forbesette (1,350-meters) with its signpost, mountain spring and picnic table.

We follow sign 17 for Rifugio Azzoni. The lower trail, marked DOL, continues past a traditional charcoal pit — making charcoal, it was done by a carbonaio, was once a vocation here. The path is popular for cross-country skiing, snowshoeing and Nordic walking.

We walk for another 30 minutes overlooking forests and verdant hills and dales of the Imagna valley. Hikers who have started from Pian d’Erna or Brumano join us on trail 17. Then the climb becomes steeper and we exit the woods into open country. I begin to see why this is a medium difficulty trek.

We clamber over rocks. Looking way up into clear blue, we see a cross on Resegone’s peak, Punta Cermenati (also called Punta della Croce). We stop to rest and take photos of the explosion of wildflowers in the fields and stony crevasses – dark blue Koch genziana, mauve globularia, blue bells, white alpine daisies and yellow anemone. Then we see purple allium, white veratrum, golden buttons and spiny ginestra. Further up, the cross still hovers high above. While I perch on a rock under the unforgiving sun, Marino photographs sassafras and white alpine anemone.

We finally reach the mountain hut, Rifugio Azzoni (1,860-meters), just under the peak. Sunbathers have claimed the area. We still haven’t reached the cross. I look up the stairs at the last 15 meters and begin to climb.

Now I’ve made it. What a view! It’s a 360-degree panorama. Looking west to the horizon, there’s Monte Bianco (Mont Blanc) between France and Italy and Monte Rosa in Val d’Aosta, Piedmont and Switzerland. To the north, Cervino’s (The Matterhorn) pyramid top is a clear marker of the Italian-Swiss border. Climbers consult a large stone disc etched with arrows and mountain names under the cross. They identify the Orobie range. An excited father points out Monte Due Mani, Le Tre Signori and Disgrazia to his young son. Closer to us, we recognize Legnone at the end of Lake Como. Beside Resegone, Grigna looms. We look down at Lecco and name the lakes — Garlate, Annone, Pusiano, Alserio. The mountains of the Larian triangle rise above Lake Como.

The sky overhead is clear with only a few wisps of cloud. To the south and west, below the circle of peaks and hovering above Brianza and the Lombardy plain all the way to Milan, is a layer of brown haze. I turn north towards the snow-capped Alps. From the view on Resegone, seeing what we breath, I’m happy for a change of air.