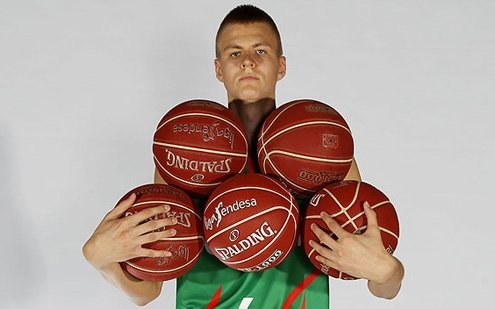 As happens every year, American sports media scrambled to assign grades to each team’s picks. Though seen as a player with tremendous “upside,” or potential, Porzingis was immediately dubbed a “project” — one for the future instead of the present.

Though NBA Draft night offers a formidable cauldron of semantics, the mood of some Knicks fans was unmistakably incensed. These were the ones who wanted someone who could “contribute right away.” With so many need areas across the roster, the “best player on the board” would have sufficed.

A Knicks fan, I left the United States six years ago. With the team playing gruesome basketball for the better part of the last decade, the summer off-season — and the possibilities it represents — attracts considerable emotional investment.

In Europe, the soccer transfer window serves the equivalent function of the NBA Draft and free-agency period, the two running concurrently through the summer.

This year, I’m struck by how differently American basketball and European soccer leagues propagate player changes, how the media relays it to fans, and in turn how fans consumes it.

The outlook of a given NBA team is conditioned by scarcity, a principle all fans understand. Compared to the other major American team sports, soccer included, NBA teams field fewer players, has smaller rosters, and selects from a smaller overall pool of talent. Add a salary cap that puts a ceiling on each team’s overall spending, and the impact of each player decision, even marginal, is enormous.

The yearly draft and the free agency period, when out-of-contract players become eligible to sign with other teams, represent rare windows of opportunity for teams to alter their destinies. And yet, there is no guarantee that a given draft or free-agency pool will offer a player capable of shifting the competitive balance of the league. Imagine sketching out a puzzle but having to wait three years before having pieces that might fit meaningfully into its completion.

The decision to select Porzingis was met with hostility because it cast doubt over the puzzle New York is trying to build. The Knicks recently tied — and some would say surrendered — their future to 31-year-old maligned superstar Carmelo Anthony. For those who thought that his $122 million over five years was hard to stomach, taking on board a “project” like Porzingis as Anthony approaches the twilight of his career came as a sucker punch.

If NBA teams are primarily concerned with managing scarcity — of available talent, of money to spend, and of windows of opportunity — then the exact opposite is true of Europe’s soccer transfer market.

UEFA’s Financial Fair Play imposes limits on the amount a club can spend, but it is a limit tied directly to the club’s income. Many of its provisions are opaque, and some would call its punishments light.

For the 20 or so richest clubs in Europe, the transfer window and the news cycle that accompanies it is akin to shooting fish in a barrel. For the reader, it is a case of reading what you want to believe.

While clubs may miss out on a certain transfer target, the sense of setback is fleeting. Every position on is available to a raft of potential replacement targets from around the globe, and the pool isn’t restricted to out-of-contract players. Ranking or grading the list of possible transfer targets becomes nigh on possible. Instead, the ambit of the media is to disseminate — and often fabricate — any hint of a potential deal.

Yevhen Konoplyanka, an out-of-contract Ukrainian star, was in the space of one weekend “on the verge of signing” for at least three clubs, and had been “spotted undergoing a medical” in two different European capitals. It’s very likely that Konoplyanka’s contract status, which news “reports” could only hint at, were leaked by his agent to stoke a bidding war (he finally signed with Sevilla).

In the NBA, by contrast, we know exactly how much salary wiggle room each team enjoys, the list of available free agents, and the picks they hold on the draft board.

The situation in Europe is far less transparent. Instead of simply subtracting the team’s payroll from the salary cap, the quality of signatures depends on complex financial statements submitted to UEFA and the successes and failures of takeover bids that occur behind closed doors.

In Italy, both Inter and AC Milan have already managed to splash more than €30 million on a single player.

How have the slumbering giants of Italian soccer regained their vitality? We know that a Thai businessman purchased a 48 percent stake in Milan to relieve the financial stress on Silvio Berlusconi, and rumors swirled in May that the obligations of Financial Fair Play would be relaxed to permit more owner-financed investment. The latter should help Inter, which fell foul of UEFA regulations last year.

But beyond the hearsay and half-stories, it is near impossible to predict a club’s true spending power come the summer. In Europe, it is a case of more news, less information.