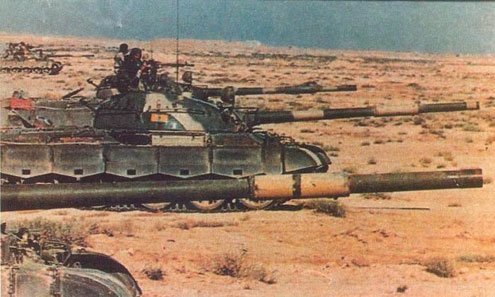 In 1980, Iraq invaded Iran and a decade-long war followed, since the two armies canceled each other out.
I

n 2003, the United States triumphantly routed Saddam Hussein and went about the delicate if tricky business of ruling as an occupying force. Among its first moves was to dismantle the Iraqi army, largely seen as part of the Hussein apparatus. Dissolving it stood for a more comprehensive victory, since armies tend to stand for the leaders they defend, or fail to.

However haggard and sanction-depleted at the time, Iraq’s military was nonetheless a force that Hussein groomed over four decades and had used to fight a decade-long standoff with Iran in the 1980s. Its best units were rigorously trained, though no match for technologically advanced U.S. invaders.

The dismantling, which met with mixed reviews at the time, is gradually emerging as perhaps the most fatally flawed postwar American policy decision as Iraq now tumbles apart because its panicked leadership has no veteran, cohesive army to command against a new (and predictable) wave of Islamist insurgents.

The post-Hussein Iraqi army, trained by the U.S. and mercenaries, has little affection for its masters, lacks a calling, and decomposes under pressure. Tried and tested, it has failed abjectly, with Sunni militants and Kurds retaking northern cities once occupied by American troops at considerable cost.

Time and again, American good intentions come to rot in the Middle East. Egypt is a case in point.

In 2011, a popular revolt (more about food than religion or politics) produced the ouster of a repressive president — such figures remain the regional norm — and ushered an Islamic party replacement. But the disciplined and secular Egyptian army, a “faith” unto itself, resisted the move and eventually pushed back to ensure its longstanding power base. It ousted the elected president, jailed key members of his party (as they’d been jailed under the previous president), and meticulously engineered a vicious reverse coup that has since led the army chief who concocted it to the Egyptian presidency.

The U.S., which once applauded the so-called Arab Spring, has fallen mostly mute. But the muteness fails to conceal private relief that Egypt’s army, like Pakistan’s, remains averse to Islamic zeal.

Then there’s Syria, where the latest Saddam-like bogeyman, Bashar al-Assad, has so far defied all predictions and managed, with ferocity that ignores accepted rules of engagement, to fend off the same Sunni insurgency that’s now running amok in Iraq. Once again, the Western diplomatic response has come at two levels: the first and obvious one has decried Assad’s at-all-costs authoritarianism; the second has been just a little grateful that he, too, possesses a secular bent and refuses to accept the radicalizing advance.

The layers of the new grand game being played in Iraq, Syria, and Libya are, from a Western perspective, head-spinningly complex, with Sunni and Shiite factions arrayed against each other in a way that neuters the word insurgency, since the genes of the quarrel are deeper.

But there’s no doubt Iraq is in serious trouble, the kind Hussein sought to avert through terror, self-aggrandizement and the creation of a military once capable of brutally “taming” religious and tribal onslaughts. It mattered little to Hussein (or more lately Assad) if poison gas needed using.

The new Iraq, shaped in shadow of the decade-long American surrogacy, has the hybrid values of a confused nation and is hopeless ill-equipped to confront an adversary that has not and will never play by Western rules. Its shadow army reflects an incipient democracy that has little passion for its national self.

Had the U.S. avoided dismantling Hussein’s structure, choosing instead to repopulate its core leadership, there’s little doubt an Iraqi general, in the Egyptian vein, would have interceded to take control and resist the ongoing sectarian advances it was educated to find repugnant. Even the U.S. might now be leaning on such a figure, and his army, to prevent what is an obvious descent into civil war — with Iranian and Turkish intervention (both are border nations) a real possibility.

Though Iraq has recently returned to American headline news it’s highly unlikely the U.S. will retrace its military steps. The reason is that Iraq, for most public opinion, belongs to the past, a mistake requiring active forgetting in much the same way Vietnam was made to vanish from national headlines after 1974.

But somewhere in the often fickle and crooked halls of Washington, war school students and geopolitical experts fantasize about what might have been: an Iraqi army as strong as it was in the 1980s ready to repel Islamic insurgencies not on orders from the U.S. but because, to the leadership of that same vain army, the radicals represented an proselytizing, alien race eager to impose retrograde values. Iraq, like Tito’s Yugoslavia, was an arrogant but fragile house, but one Hussein felt had successfully acquired “don’t tread on me” status.

That status is gone, and the embryonic democracy installed in its place an orphan in a region where orphans are not sent to social services but killed on sight.