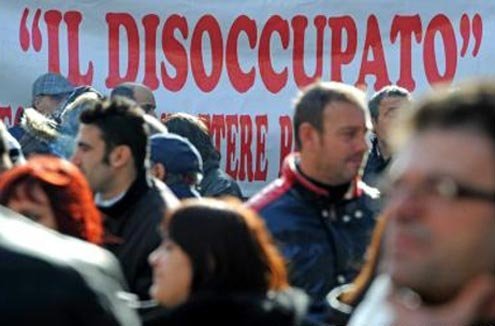 The youth unemployment figures may be high, but they were just as high in the 1990s.
L

ast fall, then-Education Minister Mariastella Gelmini outlined a few low maintenance ideas to help sooth Italy’s chronically high youth unemployment rate. First, high schools and colleges should publish online student curricula and furnish them to the “ClicLavoro” site, a job-hunting site sponsored by the work ministry. Second, colleges should guide students toward curricula aimed at sectors in need of graduates. But nothing could stick, she admitted, without the dismantling of Italy’s system of favoritism and nepotism, known as lavoro racommandato, or work obtained through insider recommendations.

Gelmini’s October remarks were predictably lost in the shuffle. She’d never been a teacher’s pet. Her controversial education reforms, passed in 2009, were heavy on discipline but low on teachers. They generated two years of street protests.

One person who did pay attention, albeit skeptically, was Emanuela De Marchi, who covered Gelmini’s speech for Diritto di critica, an online news and politics website. Would the plan be enough, she wondered, “to eradicate what’s a certifiable cultural method, the ‘raccomandazioni,’ a method that automatically bars large segments of youth from having any chance at competing for the best jobs, independently of personal qualities and competence?”

“We’re a nation that dreams daily of become a meritocracy,” wrote Cristiano Gatti in an essay for the conservative Il Giornale, “but also one that when kids need work sees parents turn to their Rolodex of close friends and pick up the phone and say, ‘Doctor or your honor, what about dropping by for dinner tonight at my place? I need to talk to you about something, nothing important, don’t get upset, just a small favor, it’s about my family, and you know I’d do anything for my family…'”

Favoritism, Gatti added, is “the millstone of our civil society… the purest Italian damnation” — “We find sons and nephews at all levels: in city government, press offices, think thanks, regional administration, television, newspapers, banks, universities, sitcoms, and the halls of major hospitals.”

However persuasive Monti’s economic reform efforts they can’t budge the Italian gut view that merit-rewarded work is a mirage. Favors are tangible, active. Merit is passive, alone. Initiative and hard work are tied to bidding for the favor, not to the job that follows. Lifetime jobs are a natural outgrowth.

Much as Monti promotes the advantages of a merit-based labor, critics advertise his government as an aging product of the insider system it seeks to overhaul. Economist Monti attended Milan’s elite Bocconi University before shipping out to Yale. Economic Development Minister Corrado Passera, another Bocconi graduate, moved on to Wharton for an MBA. Welfare Minister Elsa Fornero graduated from the University of Turin before getting a doctorate in Maastricht, Holland.

Credit them all with diligence, but recognize also that they were supported by postwar parents determined to ensure their children attended the right schools, encouraging them to further their education outside parochial Italy, which still dotes on foreign degrees.

Reporter De Marchi is right: the raccomandazione system is a cultural lodestone of a jaded society that rejects a wider sense of fairness.

Bottom-of-the-pile thinking is fortified by the state of the educational system itself. Italy’s secondary schools are often shabbily undermanned and public universities, though reputable, lack funding. At the preschool level, parental groups and community organizations are more program-driven than the government. Parents are convinced from the start that they alone will be responsible for their children’s success, which makes successful instilling concepts of challenge and perseverance all the harder.

Though rising youth unemployment numbers have made mass media hyperventilate, Italian figures have been high for decades. Between 1990 and 2000, the annual rate in the 15-to-24-age bracket was well above January’s 31 percent mark. But the 1990s lacked a crisis drumbeat and the coming of the euro was heralded as a kind of fix-it sorcery. Never polished, that veneer has since vanished.

Troubled by recent bad numbers, Monti issued new reassurances. “[Youth] should continue to be hopeful,” he said. Youth should welcome challenge. Therein the paradox: Seeing challenge as part of life’s basic demands depends on parental and institutional guidance that insists on their existence as normal and their advertising their surmounting as necessary, possible and virtuous. Otherwise challenge is shunned as too daunting or useless. This is the cross Italy bears.

“It will be interesting,” wrote Gatti in November, “to see if ‘SuperMario,’ among his superpowers, also has the gift of re-instilling faith in kids who don’t have a marketable last names, a task that in Italy is harder than steadying the bond spread.”