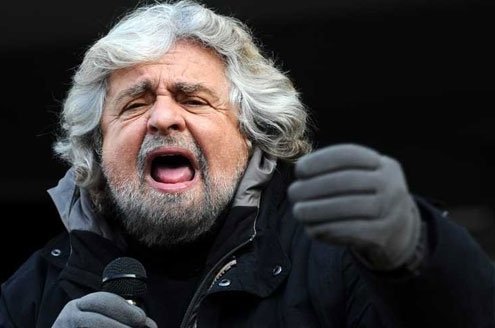 Grillo: Raging against the machine, even if it means knowing rage only.
I

taly’s view of political criticism was long reined in by the class system. Boisterous blue-collar workers whispered insults against corporate and political figures but rarely turned up the volume. Public furiousness emerged only during protests and strikes, understood as the appropriate social vessels for such rage. Lurches notwithstanding, the so-called dottore, the country’s university-educated professional — as well as the party-schooled politician — was seen as largely immune to direct confrontation. The Roman Catholic Church also played a curbing role, since publicly slandering the Church was constitutionally illegal. This led to a spirit of deep deference particularly in country’s middle and south.

That politicians sometimes brawled on state television talk shows didn’t change an underlying party bonhomie. For the public, the mudslinging was cosmetic. In fact, until the 1980s, evening news programs rarely aired audio clips of politicians, leaving anchors to confer the tone and slant.

Standards began changing when the 1990s “Clean Hands” corruption scandal unhinged the once-dominant Christian Democrats, whose leaders had created both the rules of engagement and the postwar pattern of class kowtowing. The scandal also coincided with a wildfire growth in private TV babble, something new to Italy. But even then, verbal road-rage remained elitist property. Italy’s baronial party system rarely permitted invective to progress much further than the words “shameful” and “villainous,” with boia, or hangman, the most frequent insult. Even Silvio Berlusconi, whose private TV stations ushered in new-age vulgarity, harped mostly on ideological attacks that pinned the Communist label on leftist parties and the judiciary branch. Former Northern League chief Umberto Bossi, similarly histrionic, lambasted Rome’s imbeciles before finally joining their ranks.

But Italy’s widening love affair with the Internet is changing both the game and its rules. Beppe Grillo’s braying online tribe has Americanized the critical volume while adding Italian toxins. His Five Star Movement has become the practitioner of a snarl that is not only smashing the legacy of class deference — not such a bad thing — but now threatens to subvert the civil foundations of criticism itself. Grillo’s hectoring, which is part theater and part politics, encourages public participation in a brawl that celebrates vengefulness.

His campaign against the country’s “criminal” president, Giorgio Napolitano, has a noxiousness similar to what the German National Socialism brought to bear against the root-of-all-evil Jews in the 1930s, and the sullying has continued nonstop since his movement picked up 25 percent of the national vote last February. Ironically, it has much in common with urban terrorist tactics of the 1970s, which used political killings to try to induce a Fascist relapse. The subversion failed.

This time around, however, some mainstream public figures are beginning fight venom with venom, risking a Pyrrhic change in the rules of engagement.

The deferential class paradigm, which also included basic social civility, is losing out to the online world’s leveling and semi-anonymous Fight Club spew, which confrontational demagogue Grillo, embracing Glen Greenwald, equates to democracy at work. Years of mediocre governance coupled with a four-year recession, he insist, validate scorched earth tactics, even if both means and ends are potentially ruinous.

But rage is not criticism, let alone constructive criticism, particularly an individualistic environment that has yet to fully fathom the idea of civic or personal responsibility. Kill the politicians, unlike the 18th-century French kill the king, doesn’t come with a post-game manifesto. It’s a tangle of emotional self-indulgence tinged with despair that chooses to see verbal vandalism as affirming. The result is lynch mob bullying validated by online numbers.

Italy loves trends, and its online dalliance remains fresh. Even Facebook, aged 10 in the American world, is a babe in Italian arms. Long hemmed in by filters, Italian anger-mongers now have the all clear to let loose and copy the rabid tendencies of extremist soccer fan legions, known as ultras, for whom disruption is a destructively enriching passion play. Some teams have been fined, their stadiums closed, to slow thuggery and racist chanting.

Grillo’s free speech defense is unlikely to change. Nor is the lashing out. The risk, however, is that Italians come to see all political and social debate as a public spittoon available to phlegm and phlegm only. Parts of the U.S. have already opened the cesspool hatch. Confrontation is the norm. Now, copycat Italy is attempting to do the same.