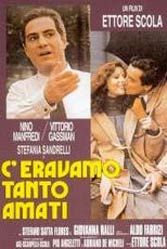 Ettore Scola’s elegiac film is a watercolor homage to neorealist master Vittorio de Sica and all the Italian filmmakers (Rossellini, Antonioni, and Fellini) who chronicled the squalid and the surreal in post-war Italy.

With an assist from memorable flashbacks, the friends resume their intimacy and Scola frames the enchantment. Walking through the city, the men come upon Fellini and Marcello Mastroanni filming a landmark scene, letting Scola blur actual and fictional. The then-and-now mood recalls maps of Rome in which the ancient and modern city are overlaid with smudgy cellophane in between.

Scola is never self-conscious. For him, film history is visually edible romanticism with a bittersweet edge. Though deserted by youthful ambition and stained by age and failed relationships (enter Stefania Sandrelli), the men are restored by celluloid.

This is a fraternal remembrance of things past made vivid by Gassman and Manfredi, but jolted to life by the thrilling Neapolitan Satta Flores as Nicola (he died of cancer in 1985 at age 48).

It’s the kind of loving and generous production (ideological also; Scola was a devoted communist) that has all but vanished, together with the idealism that reared it.