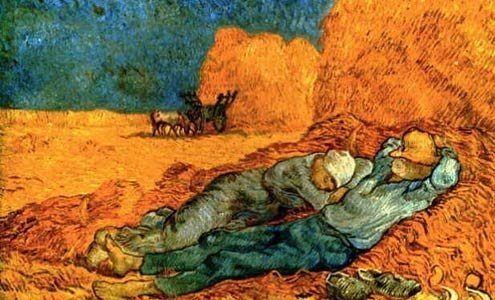 In terms of work life, Italy has always been split down the middle.
T

he last month led me away from Rome, both north and south, and made it clear to me that I’m awfully partial towards central Italy. After five years in the capital, I may have unconsciously absorbed the pace of Italy’s middle. Rome straddles a fine line between Italy’s upper and lower halves, sometimes mixing and melding the two, sometimes embodying both real and stereotypical similarities and differences.

I try to keep in mind that Italian unity is only 151 years old. Before 1861, north-south differences extended well beyond landscape and weather. In 2012 (just as 50 years ago) vast economic disparity exist between the mezzogiorno (a term for the south popularized after the unification), which is still mostly agrarian, and the part of the boot that sits atop it, most of it carpeted by industries.

On which side of this invisible boundary is Rome?

The characters in Amara Lakhous’s 2008 novel “Clash of Civilizations Over an Elevator in Piazza Vittorio” often find themselves asking this question. They are a mix of immigrants and Italians living in Rome’s multicultural Piazza Vittorio. Professor Antonio Marini from Milan opens his section of the book with a humorous anecdote about waiting for the no. 70 bus at the Via Giolitti terminus. After a half-hour, three buses arrive together, park, after which the drivers leave and cross the road for coffee. Marini then asks, “Are we in the developed world or the Third World? I don’t live in the paradise of tourists; I live in the inferno of chaos! For me there is no difference between Rome and the cities of the south… The people of Rome are lazy, that’s the obvious truth.”

Some years ago when I traveled north from Rome to Verona I was struck by a feeling that I’d left Italy and entered Europe. Cultured and calm Old World sounds, sensibilities, smells, and other European associations permeated the clean cobbled streets. Well-dressed people leisurely bicycled; they sipped orange aperitivi before sunset; men and women, young and old, conversed in low tones, their hands engaged in subdued gesticulations.

The chaos I believed characterized all of Italy was hauntingly absent. I was convinced that Rome, and other towns throughout Lazio, fit into a one-size-fits-all Italian glove. The Verona trip proved otherwise.

Though Naples is only an hour south on a Frecciarosa bullet train or two hours aboard a quick Intercity, when I stepped out of Central Station last weekend, chaos stepped up to fulfill every ingredient of its meaning, overloading my senses: colorful laundry billowed and crisscrossed above narrow streets as a helmet-less family buzzed by on a scooter. Boys of all ages kicked balls back and forth; stalls with fried street food appeared by the dozens. In Naples life is lived on the streets. I couldn’t help but compare Naples, more than Rome, to some Asian cities I know.

Returning to Rome from Naples, stuffed with pizza and pastries full of sweet ricotta, the streets seemed to me like dreamy galleries. I was suddenly comforted by the vain dramatics of the Romans and their slang, which director Pier Paolo Pasolini once said stems from a “fundamental narcissistic fixation.” Post-Naples, Rome’s bella figura dressing seemed more elegant.

Where was I? Had I bypassed Termini Station and landed in Verona? But reality settled in after a few days back. The insane growl of revving scooters sounded just as loud as it was in Naples, and sometimes louder.

As I travel more regularly through Italy, I realize that part of Rome’s draw is its unique centrality. In the north, I’d miss the chaos; further south, I’d find it overwhelming. In Verona I’d long for the smell of the Mediterranean; in Naples, the sea would be too distracting. In the north I’d feel underdressed; in the south I’d feel too dressed up.

Not to mention that Romans make the best pizza.