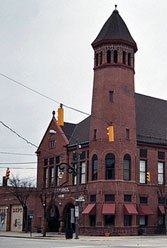 y height, my long arms, and my smile are pure German, gifts from immigrants who arrived in the 1800s. Looking into the future, they probably didn’t imagine me in New York City. But I am here because of them.

My father’s family planted its root along the western border of Ohio, in Mercer County. Flat and fertile, with patches of deciduous trees, it is dotted with church steeples and silos. Celina, at its center, hugs the shore of Grand Lake St. Mary. There, they bought farm land and began making families.

I hadn’t given any my ancestors much thought until I arrived at a family reunion last month. With the lake as the backdrop, relations young and old arrived to share stories, trace the family tree, and catch up on news. While the baked beans and potato salad meandered around, I hungered for something deeper.

This small town was my father’s boyhood home, the place where he learned to ride a bike, throw a ball, and ran home for supper. I wanted some time with him.

I took him aside and asked him if he’d take a walk down Main Street with me. I hoped it would bring to life the young boy inside my 86-year-old father. He agreed.

We made our way through the center of town with its one stop light and turn-of-the century brick buildings, each trimmed in Victorian detail.

At first he was quiet and contemplative. “Oh my, that was a long time ago.” I said nothing. I let his memory brew.

Then, like the beginning of movie reel, he became animated. “We ran up and down these blocks during the Depression. The economy was bad, but we didn’t know it.” He pointed to a street corner. “There used to be an IGA grocery there. I stocked the shelves after school.”

He pointed to a building with an old neon “Drakes” sign hanging off its façade. “And on that corner was the drug store.” At a large stone firehouse he said, “This used to be city hall. All the meetings happened here. Celina was the county seat. I think it still is.

“But we were Catholics, you know, and everything revolved around the Church. The Catholics were on the west side of town, the Protestants had their churches across the street to the east.”

We circled toward a huge church, its three large domes covered by a green patina, the Church of the Immaculate Conception. “I went to grade school in that building and high school in that one,” he said pointing out two adjoining buildings to the church. “And of course we used to come to mass every Wednesday and Sunday, without fail.”

We walked in. Vast pointed arches crossed the ceiling and rose up toward the rafters. Front and center was an ornate altar adorned with Catholic icons.

“Everyone pitched in to build this church.” He said. “It was quite an undertaking.”

“I want to show you something.” he said. “Let’s go upstairs to the choir loft,” he said. “There’s a big pipe organ up there.” I turned to the back of the church and saw a small rose window and sliver-slotted tubes rising to the balcony.

“But the best part,” he said whispering, “is the secret ladder that goes to the dome.” As we reached the choir loft, he pointed to where stairs dropped down. “There used to be a wooden ladder with rungs and you had to hold on tight. I’d to climb to the top of the dome and look out.” My father’s face turned young. “You could see the lake, the whole town and everyone in it.” He broke out in mischievous laughter and gave me a hug.

“Maybe that’s why you like to climb mountains,” he said. “You get that from me.”

As we left the church, he took one last look down the aisle to the altar. “I married your mother here you know,” he said with a smile. “And it’s a good thing I did. Otherwise I wouldn’t be telling any of this to you.”

I’m certain my ancestors weren’t thinking of “generations hence” any more than I am now. They just did laundry, made meals, found a way to pay off loans and save enough for emergencies. Why I want to know them I’m not sure.

Perhaps it’s just to know that I am an apple on a big tree. In my own red skin for sure, but hanging with many others that share a common branch, a common trunk, rooted in old genetic ground.

The lines on my hands bear something in common with them. The shape of my jaw and the crease in my brow when I focus and squint are characteristics — gifts — passed down from the German settlers who farmed the land of Mercer County.

I don’t feel I owe them a debt as much as a wave, to look back at their lives from time to time. As I hope someday many years hence someone will pause to look at me.