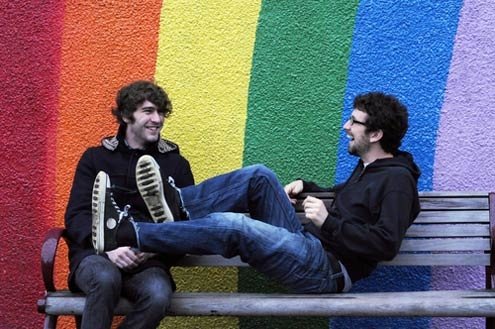 he title is right there, emblazoned on the cover in stark white capital letters: Celebration Rock. It’s been a long time since I’ve listened to a record that lives up to so nakedly ambitious a billing. But unadulterated joy never loses its luster.

We have Vancouver, British Columbia duo JapandroidsPost-Nothing in every way. It’s a little louder, more brash, more sweeping in its generalizations, more willing to speak in grandiose terms.

It’s also more melodic. Post-Nothing was an album that rode the highs of “The Boys Are Leaving Town” and “Young Hearts Spark Fire,” but their songwriting wasn’t as strong and, anyway, they were preparing to give it all up before an online maelstrom of hype turned into festival gigs and an endless touring schedule almost overnight. So what happens post-all of that? What happens post-everything?

The band’s high-watermark, as it turns out. Right from the fireworks that bring “The Nights of Wine and Roses” to life, you know this is going to be “big.” But it’s larger than one could expect from two guys recording live with no double-tracking and minimal overdubs. It’s the stuff that brings people together across generations: fist-pumping choruses, effortless melodies, romantic lyrics. It’s the bread and butter of every bar band in America (and maybe the world) still figuring out Bruce Springsteen covers or sleeping on The Replacements. I can’t recommend it enough, even if I’m still figuring out what pop-punk band they most resemble…

There’s also an air of communal joy in the music of Le Super Parakou de Borgou on the new release, The Bariba Sound 1970-1976 (Analog Africa). Frankfurt-based Samy Ben Redjeb has been running Analog Africa since 2006 or so as the marketplace for unearthed rarities from West Africa has grown. But this is among the label’s best.

Orchestre Super Borgou (as they were also known) was the brainchild of Moussa Mama, a goldsmith in Ghana in the 1950s; he founded the band upon his return to northern Benin thereafter. Though a strong rock’n’roll lineage runs through songs like “Abakpé (Afro Beat Bariba),” folk influences of the local Bariba and Dendi tribes inevitably seep in to make this collection invaluable.

It always amazes me to hear the vibrant musical power of the Islamic Funk Belt, even as Africa’s 1970s war clouds gathered — in this case, Benin’s 1972 military coup and the subsequent chokehold applied by Mathieu Kérékou’s Marxist regime. It’s a flooded market out there with labels like Soundway and Strut, but there is something particularly special about The Bariba Sound. Essential listening.

The same can’t be said for Savannah, Georgia metal trio Baroness. Their third album, Yellow & Green (Relapse), is a great example of what was once enjoyable becoming insufferable.

You could see it coming. 2007’s Red Album inspired fans of a strain of metal that incorporated the 70s Southern rock of Lynyrd Skynyrd, the sludge of scene stalwarts Neurosis, and the prog tendencies of rock bands across the decades. Previously, this had been the dominion of Atlanta’s Mastodon, but 2006’s Blood Mountain was a jump of the shark into bloated excess.

2009’s Blue Record was similar but slightly softer. Baroness retained metal roots but increasingly emphasized harmonies. It was an open invite to listeners still dipping their toes in the metal pool, a middle ground between radio rock and metal’s myriad subgenres.

But Yellow & Green? This barely pretends to be metal over the course of its two discs and 18 songs. A few crunchy guitars on lead single “Take My Bones Away” and some muscular riffing on “Sea Lungs,” sure, but this is early 80s AOR with a post-grunge sheen at its best; at its worst, this is what countless nü-metal demos must have sounded like. Staind, Crossfade, Puddle of Mudd. Love those mopes? You’ll love this.

Once a non-metal fan’s metal band, they’re now sensitive prog-rock tripe, not even good enough for that. I’m all for celebrating progress until you lose the drive that got you playing in the first place. Mastodon is a lost cause, but it’s not too late: A step back from ambition might yet save Baroness.