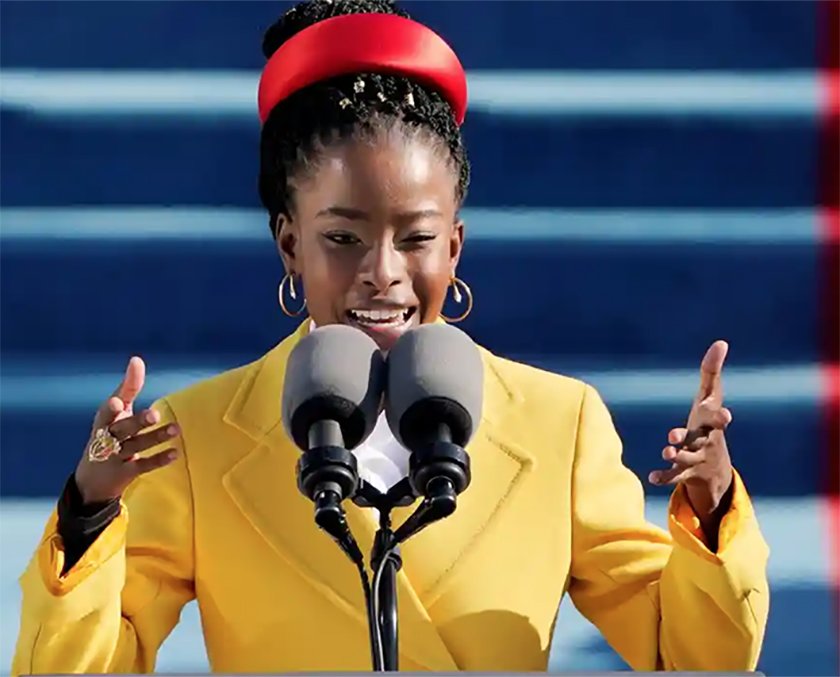 Seeing light: Poet Amanda Gorman at the Biden inauguration.
I

f you’re as incurably literary a person as I am, any library in proximity is a beautiful haven. There are many such havens in my area, but the New York Public Library is one that I’m not able to access easily.

To get there now I must go back in time to August 2019 in Lower Manhattan, during one of my periodic pilgrimages from rural Normandy to my true home city. While in the library, my mom and I found ourselves inside and happened upon an exhibition commemorating the life and work of the groundbreaking 19th-century American poet Walt Whitman, spiritual father to most of the poets and thinkers whose work spoke to me in some way (think Jack Kerouac, Allen Ginsberg, Langston Hughes, Oscar Wilde, James Baldwin, Bob Dylan). I picked up a small pocket edition of Whitman’s most recognized work, “Leaves of Grass,” my lone memento of that visit, and devoured it as soon as I returned to France. I’d walk through the schoolyard with the small tome tucked away in the inner pocket of my Uniqlo winter coat.

The collection, first published on Independence Day 1855, contains a series of free-verse poems, “Song of Myself” the most famous, embracing the concept of the American “open road” (which can be spiritual or geographical), a road that symbolically stands for the complete, unabashed liberty of the individual to define and undertake a life journey of his choosing, and to exalt it, while at the same time being aware that he belongs to a greater brotherhood of souls.

The open road stands for the complete, unabashed liberty of the individual to undertake a life journey of his choosing.

The opening lines of “Song of Myself” strikingly sum up this vision:

I celebrate myself, and sing myself,

And what I assume you shall assume,

For every atom belonging to me as good belongs to you.

I had read many books that expressed this sense of belonging, but I hadn’t heard anybody deliver a recitation while at the same time realizing the ambition itself. That is, not until I watched the 22-year-old National Youth Poet Laureate Amanda Gorman, clad in a vibrant yellow coat and armed with a voice of passion, step up to the microphone during the inauguration ceremony of Joe Biden. And open a new American era.

When day comes we must ask ourselves, where can we find light in this everlasting shade?

Indeed, the notion of light in the darkness has been very hazy of late, a grim pandemic drying out vitality while dimming the lives and livelihoods of millions. How refreshing it was to begin this new chapter in the nation’s progress with a reference to light. After all, light from a lighthouse has traditionally represented hope in the midst of a storm.

Gorman tapped into that hopeful sense of light, and from that moment on everyone watching and listening — from the Washington steps to the other side of the ocean — was hooked.

Gorman set the bar high, because writing a poem about the hopes, dreams, and aspirations of a nation isn’t the same as attempting to reflect on those of an individual. A nation’s identity is diverse, and not singularly interpreted. Nobly, that didn’t stop Gorman from speaking of a collective history and collective goals, never once flinching or backing down from her hopeful view of expectations.

Amanda Gorman, clad in a vibrant yellow coat and armed with a voice of passion, opened a new American era.

Let me focus on a passage in which she links the United States, “a successor of a country and time,” to her own life and growing up. She writes of “a skinny Black girl, descended from slaves and raised by a single mother,” who “can dream of becoming president only to find herself reciting for one.”

Why do I choose this passage? Because it illustrates the Whitman-like celebration of self.

There is no ego here, just the desire to speak aloud, to walk down the road.

And the road matters all the more because with the change in presidents and presidential tones, the path forward, and perhaps the road itself, is different than it was before. Hers is very much a “new day” poem.

To celebrate oneself is to strengthen one’s soul and to thank the open road that has guided us so far and contemplate how many miles we still can walk. Whitman’s poem was in part an ode to an expanding, vibrant, noisy, and ambitious America, very much reflecting the mood of the expansive times in which he lived.

In Whitman’s spirit, Gorman, speaking of the hills we must climb, gave a sense of powerful sacredness to her mission, again like Whitman.

How liberating it was for a teenage Franco-American writer to hear words conferred what they have been denied in recent times, a place of honor.