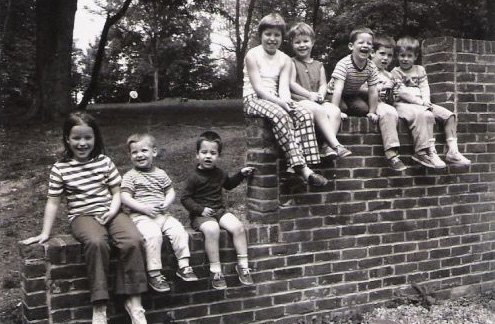 rowing up, my bicycle was my second set of legs. On it, I peddled to the far reaches of my tethered rope. To the newly plowed fields of Zimmerman; to the big trees surrounding Caesar’s Creek. Everywhere I left a treaded print of my passing, like an animal marking its territory. My rubber tires outlined the domain of my 12-year-old world.

In the 1970s, kids were set free to roam. Parenting was permissive and I took full advantage. Playgrounds were for playing, not for fearing pedophiles. Lawson’s, the local quick mart, sold 10-cent popsicles that left a tongue cherry red. I sang Simon & Garfunkle’s “Cecilia” while pumping my legs on black-slatted swing sets. The clouds seemed so close.

My family was politically liberal, as were the times. My brothers grew their hair long and my father ranted it was the reason they couldn’t get a job. Bell-bottom pants were in their first incarnation and wide belts with heavy buckles hung below the belly button. My siblings were hippies and everything was “far out.”

A few days ago, I finally realized that past was really past. From my Midtown Manhattan office, on national television, came breaking news from Dayton, Ohio. The broadcaster’s deep voice said “Dayton” with the kind of gravity the birthplace of flight always sought but never got. But the Wright Flyer wasn’t involved. It was a plane from Alaska.

The national news crew was broadcasting from The Nutter Center, the local university’s new stadium for sports and cultural events. It was down the street from my parent’s house. What was so important to be happening from there?

I watched and waited.

Nothing prepared me for the moment when John McCain, the Republican candidate for President of the United States, stood up to announce his vice presidential running mate from Alaska, Sarah Palin.

What on earth were they doing there? Why, of all places on the continental United States, must they politically play to this piece of heartland?

From the inside of the stadium, old classmates and neighbors formed the crowd of white faces holding McCain-Palin placards. Like me, they had changed and grown up. They were plump and proud, waving flags and demanding safety from “the terrorists.” They had no real idea. I did.

From my desk, I shed a tear. There was nothing I recognized in this crowd. My family protested the Vietnam War, and here was McCain touting his torture. This should be my America, but it wasn’t. The peace sign patches and headbands were gone.

And so were my bicycle tracks, buried deep below the foundation of the Nutter Center.