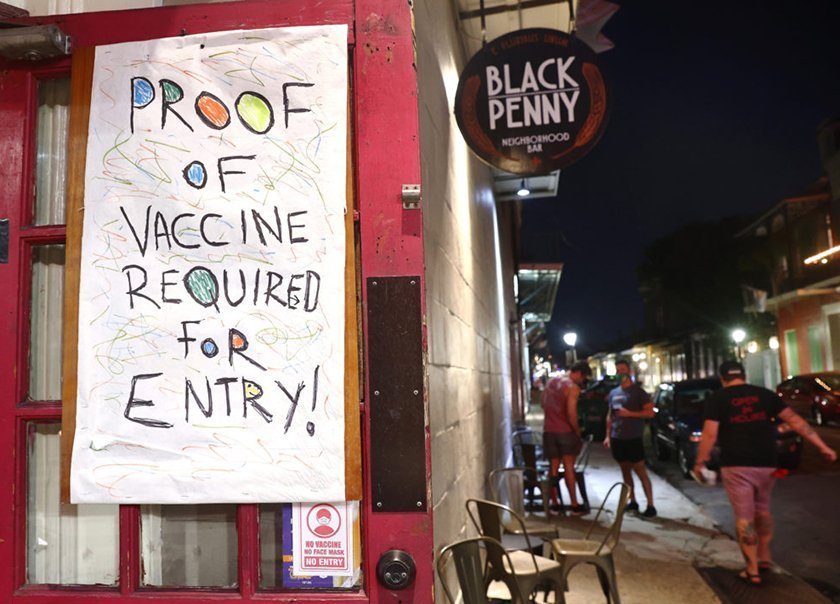 Corona has ushered in a new system of segregation, the clean and the unclean.
A

cardiologist is interrupted mid-visit with a patient by an incoming call she says she must take. The electrocardiogram is paused. The call is from a frantic teenager, the daughter of the doctor’s friend. She has fallen from a horse and has scraped herself on a rusty patch of fence. She is sobbing. Will she get tetanus, will she get COVID, will she need a shot or hospitalization. The doctor calmly reassures her, or tries, and returns to her work. “Everyone is too nervous,” she says.

A blogger I know, a physician, places a pre-Christmas entry on her pages and titles the entry “Presents or Panic?” It is intended, she says, to give people a sense of what precautions are necessary in order to enjoy the holidays without virus trepidation. Though a wise doctor and a good writer, she fails to consider that the entry itself, worded in alarming fashion, spikes the punch. Speak of panic and people do not focus on Christmas.

Returning from the cardiologist is a nightmare. Rome’s traffic, always mad around Christmas, is far worse than normal since no one wishes to take public transpiration. They prefer the safety of small moving caves, which is what cars have become.

In all things human there is a law of unintended consequences. In the case of the virus, the zeal to protect and uphold the virtues of enlightened science has dug into the marrow of human anxiety about both contagion and mortality, leaving science only partly triumphant in its war on disease.

How triumphant can you be when millions are afraid, borders closed, and demarcation lines set up so that the unvaccinated, the lepers of these times, are kept away from the rational majority, vaccinated, boosted, and eager to dwell on what has become the world’s favorite subject one hundred times over.

Science may be “winning,” or asserting its place as religion’s surrogate, but is any of this behavior healthy? No, it is not, and so it is the rafters of science are hung with infinite banners, alone and in clusters, representing personal anxiety, a tribal resurgence of medieval disagreements – the vaccinated laying into the defiers with crusader-like fervor. All this a few years after the developed world declared it had beaten back Islamic extremism, another anti-enlightened, anti-scientific monster.

How triumphant can you be when millions are afraid, borders closed, and demarcation lines set up so that the unvaccinated, the lepers of these times, are kept away from the rational majority?

Now, however, it’s difficult to swear by enlightened medicine without at the same time worrying that the safety and protection it wishes to confer (at least allegedly) is not itself an adjunct of that which it wishes to cure, as in the hackneyed phrase about cures being worse than the maladies they’re tasked with fixing. The collision of science with fretful, exaggeration-prone humans is creating a jagged planet filled with erratic rules and bizarre approaches to containment.

That’s because though science may be immaculate, its data biblical in stature, sentient beings put emotion before critical thinking and the result is almost inevitably chaos, albeit at a low boil.

The simple truth is that the so very scientific developed world was not ready for an illness of the kind it had relegated to inferior, non-hygienic peoples, who would forever be afflicted by this or that, to which the West would respond as always in Kipling-esque White Man’s Burden style. It would repair the maladies of the backward of the planet.

Until backwardness came front and center, into the scientific heartland, and all froze before reacting, at first incapable of comprehending what had happened.

Next came death tolls and with them widespread fear of mortality and infection in areas bereft of such worries for a century. Science then leapt in to save the day, or did it?

Not so far, because this wound is a deep one. The enlightened feel vulnerable and can blame their woe only on those who refuse to follow medical protocols. That battle is fierce and omnipresent.

Deeper is the knee-jerk fear that life may not be as beautiful as advertised, so that even a small fall from a horse assumes ominous dimensions. Even the vaccinated and the boosted scan the web for tips and continue burrowing deep into their homes or automobiles.

Science is a wonderful tool against disease but it is also a word that often comes before fiction, as in portrayals of imaginary worlds and their imaginary calamities. So it is that the world entering 2022 shows aspects of science fiction. It is a very scientific planet unable and unwilling to shed its fretfulness, which science in turn does not understand, playing with the words ‘presents’ and ‘panic’ as if manipulating a toy.

But the planet is not a toy, and unless science desists a bit on harping on the perils of pestilence, those same perils will rise up into the mind and take up permanent resident in that dark cave.