Catch Me if You Can 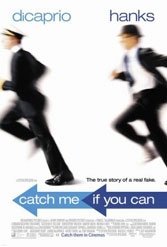 Steven Spielberg’s smooth stone — and no more — has a 50s matinee twinkle. Teenager Frank Abagnale Jr. (Leonardo DiCaprio) is a chronic underachiever who doesn’t want to be like his loser father (Christopher Walken). Alas, like father, like son. When Frank Jr. figures out he’s good at duping people he goes on a con-romp: lawyer, doctor, airline pilot. He guzzles dares, plays Don Juan, and pockets a neat amount of cash.

Trailing him is terse FBI agent Carl Hanratty (a poker-faced Tom Hanks) whose humor-challenged chase gives mischievous Frank Jr. a reason to keep upping the “I dare you” ante. Abagnale’s turn as a Pan Am pilot shows off a rarity: DiCaprio having fun. Ultimately, Abagnale trips over something he can’t fake out, that he’s a lonely kid trying to act twice his age without human or intellectual sustenance. A decent and unpretentious movie that stays fresh only while you’re watching it.