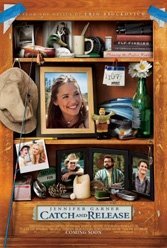 Too often, when “significance” looms — namely, “Isn’t he cute” — music swells. Common but annoying. And always bad sign always. Jennifer Garner is Gray, widowed before her wedding in Boulder. She’s all broken up until Fritz (Timothy Olyphant) weans her from dismay. Sort of. Never mind that she’s “reintroduced” to him while he’s banging a girl whose mating scream is “Sock it to me!”

Annotations and quotations are in order because director Susannah Grant (who wrote “Erin Brokovitch”) breathes contrivance. There’s no harm in sad girl meets chipper boy, on the contrary. And it’s also a pleasure to see Garner, who has among the sweetest and most vulnerable faces in Hollywood. But the rest of this, including Gray’s discovering that husband-to-be wasn’t really Mr. Perfect, is lower-case romantic comedy.