Catch-22 and the draft 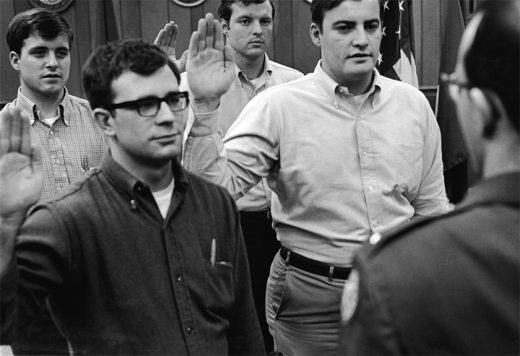 took a break from college in 1967. In retrospect, it was a foolish move. That was the worst year to give up a student deferment from the draft. The years 1967 and 1968 had by far the largest number of American casualties in Vietnam. Those killed in 1968 — nearly 17,000 — included one of my best friends from grammar school, a gentle soul who had volunteered to go as a medic and died from small arms fire while riding through a seemingly peaceful village on top of an Armored Personal Carrier. He had relaxed and taken off his helmet.

But I knew nothing about his fate when I got sick of school and decided to take a year off. By the time the letter telling me to report for service in the Army arrived, I had made some fateful decisions. One was never to go back to school.

The other was to stop avoiding the draft. I had joined a far-left communist group that, as a matter of principle, chose to live (or die) the same as the working class it aspired to represent. If they had to go to Vietnam, so would I.

I was working as a shipping clerk in a print shop when the letter — “Greetings: You are hereby ordered for induction” — arrived from the Selective Service.

I took myself to the induction center in Oakland, California.

My memory of the physical exam is hazy, except for the part where they had a large group of us stand in a circle, naked, facing outward. Then we were ordered to bend over and spread our cheeks while a bureaucrat with a flashlight and clipboard walked around the circle peering at our backsides, one by one.

I had joined a far-left communist group that, as a matter of principle, chose to live (or die) the same as the working class it aspired to represent. If they had to go to Vietnam, so would I.

I passed that exam. My asshole was prepared to die for its country.

But at the end of the induction process, they wanted me to swear to follow all the orders I would be given as a soldier. I told them I was not going to do this. They sent me to talk to a guy in a room.

“What’s the matter with you?” he wanted to know.

“A communist,” he said, sourly. “Are you a member of some organization?”

“Yes,” I said, “the Provisional Organizing Committee to Reconstitute a Genuine Marxist-Leninist Communist Party in the United States of America.”

“We’ll get you for draft evasion.”

“Who’s evading?” I said. “You can draft me and send me to Vietnam. I just won’t swear to follow your orders.”

“Well,” he said, “I never heard of this Provisional Organizing Committee.”

For character references, I gave him the names and addresses of the general secretary and the chairman of the local chapter. He was surprised by my willingness to name names.

He directed me to go home and wait for them to get in touch.

No carnage for American communists.

Dear Sir: Investigative action by the Department of the Army has resulted in the determination that you are not acceptable for military service in any capacity on the grounds that such service is inconsistent with the interests of national security.

It even signed off with “sincerely.”

For a person in my position, it was a flattering message. And I wasn’t that disappointed to avoid being sent into the jungles of Vietnam.

Yet over the years, I have often wondered what made them conclude I was too much of a menace to national security to be sent over there (the draft was suspended in 1973).

According to my draft card, I weighed 135 pounds. The group I belonged to were hardcore commies, but without gun-toting, bank-robbing, bomb-throwing, heiress-kidnapping, airplane-hijacking tendencies. We were nothing like the Black Panthers, Students for a Democratic Society, the Baader-Meinhof gang or the Symbionese Liberation Army (kidnappers of Patty Hearst).

Our subversive activity consisted of writing, printing, and giving away a comically didactic, sectarian newspaper nobody ever read. The hot content of the time was in-depth analysis of the proceedings of the Seventh World Congress of the Communist International of 1935. Maybe after their investigation, the Army was afraid I would bore them to death.

That seems unlikely. Yet no other radical I know received a letter like that one from the Army. The few other males of my age in the Provisional Organizing Committee had been rejected on medical grounds.

Perhaps I had discovered the flip side of Catch-22?

In Joseph Heller’s novel of the same name, Captain Yossarian is a U.S. bombardier flying insanely dangerous missions during World War II. According to Army regulations, Yossarian should have been relieved of duty by the Army doctor because he had to be crazy to go on putting his life at mortal risk flying more and more missions. And if he was a maniac, he shouldn’t have been allowed to fly bombers.

But to be grounded for being crazy, he would have had to ask to be relieved of duty. And by making that request, he would have demonstrated that he was rationally afraid of risking his life — sane, in other words, and eligible to go on flying more missions. That was the catch.

I, on the other hand, was willing to be sent to Vietnam despite my opposition to the war. Which was nuts. By the logic of Catch-22, I disqualified myself. It would have been crazy to put an M-16 in the hands of a Marxism-spouting lunatic like me.

But I’m just speculating. Though my FBI dossier is 350 pages long, none of those pages tell me the real reason the Army refused to send me into the meat grinder that was Vietnam. Maybe it was just another example of classic Army snafu. Situation Normal, All Fucked Up. But I lived to tell the tale.