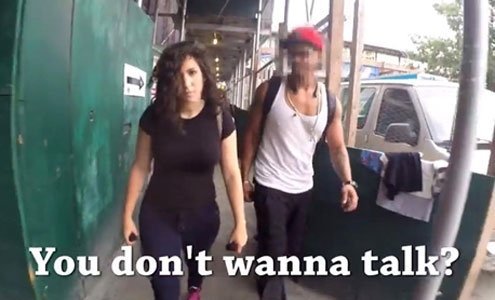 ome is widely considered a safe city. It is plagued by petty theft — wallets stolen on the metro during rush hour or a purse slipped quietly from its owner’s shoulder — but there are few gangs or incidents of gun violence. I sometimes think that if I ever have children, schooling them in Italy would be a smarter choice than in the U.S., where on-campus shootings seem to increase annually.

But even if Rome is safe, I don’t always feel secure. That’s because I’m a woman. Street harassment is common. I’ve been whistled at and catcalled. Male strangers have told me I have a nice ass, nice legs, nice eyes, nice teeth. I never stop when I hear such comments. Instead, I pick up the pace. That produces its own response, as in, “Oh what a bitch!” and, “Wow, she won’t even accept a compliment!” For not acknowledging my harassers I’ve been called a putana di merda, a stronza, a troia (words you can look up). I’ve also heard those same obscenities just for crossing the street.

In the two years I’ve lived here, men have flashed me five times, by day and at night. Each time I was left shocked, disgusted, scared, and strangely ashamed. At night, I usually splurge on a taxi ride instead of walking home alone. I have that luxury. Not every woman does.

Street harassment isn’t new to Rome. My mother has stories similar to mine from her teens. I think often of Ruth Orkin’s 1951 photograph “American Girl in Italy,” which shows a young woman being jeered at by a group of leering men as she nears a Florence corner. Many see it as playful and funny. You can buy it as a poster. It hangs on the walls in restaurants and cafes. Looking at it revolts me. The girl in the photo seems anything but flattered. She looks frightened and ashamed. I sympathize.

Of course, the problem isn’t unique to me or to Rome. In Bologna, I had male students who startled me with inappropriate comments. I once had a married music instructor well into his 70s push me against the wall of his house and kiss me on the mouth. I refused to discuss the humiliating incident with anyone. Women friends from all over the world have shared similar stories, some far worse than mine. They’ve told me about harassment in Sweden, the U.S., Britain, and Spain. Dress and age played no obvious role. One woman wore a mini-skirt; another was a Muslim in loose clothing and a hijab. I heard a story from a woman in her 60s and a girl of 16.

Recently, ending harassment has come to the forefront. Twitter’s #yesallwomen movement has take up the cause while the non-profit group Hollaback just released a startling video that captures a woman’s 10-hour walk through New York City with a hidden camera. According to the filmmaker, the woman endured more than 100 instances of verbal harassment throughout the city.

To be clear, I’m not writing this column to badmouth men. Nor do I believe all men are louts. I know good and respectful men far outweigh their counterparts. Instead, I’m adding my voice to a growing choir. I want friends (boys and girls, men and women) to stop saying I need to relax and stop exaggerating. I want an end to being told catcallers are flattering, or that flashers are benign.

My boss in Bologna, a woman, once told me to laugh off lewd comments made by male students. “Boys will be boys,” she told me after I asked to be placed in a different class. I also think of a guy friend who told me was “mean” when I mentioned that a male acquaintance we had in common made me uncomfortable. These grievances need to be heard out.

So why do these problems exist and what to do about them? Is male disrespect media-influenced? Videos by Shakira and Beyoncé may not help. Typically portrayed as strong female role models, they still market an image packed with shimmying, thrusting and slithering, mostly in skimpy outfits. In Beyoncé’s most recent music video she dances seductively in a sparkly bikini beside her husband Jay Z, who sits immobile in a chair, dressed in a baggy T-shirt and jeans.

How are our daughters and sons interpreting these images? Should parents be raising children differently, with a stricter emphasis on gender equality? And even if educational and media standards change, is it possible to massively revise the worst of male behavior? I have no durable answers to any of these questions.

Until someone comes up with one, I’ll be taking a taxi home.