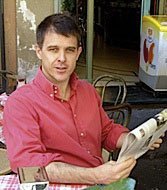 n American woman’s high expectations of Italy collide with reality in Andrew Gallagher’s feature film slated for shooting in Rome in August. He’s currently holding auditions for actors, even those without experience, to play the major roles (Susan, Giovanni, Pamela, Laura, Paul) and the minor ones. No experience necessary, says independent filmmaker Gallagher, whose budget is €36,000 — a hundredth of what a major star makes per picture.

The main character yearns to go to Tuscany with an obsession fostered by a book similar to “Under the Tuscan Sun” by Frances Mayes, but he and his crew will be filming mostly in the grittier parts of Rome to convey a less idyllic version of life for foreigners in Italy.

Gallagher says that he can’t ignore the American obsession for all things Italian. “I am interested in shooting in places not so pretty, but the American market wants cobblestones,” he admits.

Despite the romanticism churned out by books and popular films about Italy, many who have spent time in Italy know that not every home is a villa, the sun doesn’t always shine down on ripe grapes, and Italians aren’t perpetually jovial folk waiting to help foreigners relax into their culture.

“I have always been interested in real Italian life,” says the 36-year-old Gallagher. “I find that the ferramenta is more interesting than a museum. I have tried to get off the beaten path.”

Which is exactly what he did when he arrived from California 15 years ago without a plan. “I felt a connection to Italy,” he says, which lead him to study Latin and Italian at Berkeley College and then live in a place with more antiquity than strip malls.

In part avoiding the expat scene in Rome, he planted himself far from the center and worked odd jobs like selling fish and filming Italian weddings. He eventually settled into teaching English and now owns two schools, which allow him the time and money to pursue his next career as writer and director.

“I have always wanted to make movies, but I got sidetracked,” he says, now ready to shoot after six years of writing the screenplay.

His film, “Not Like It Is Here,” depicts real Italian life, or at least real life happening (sometimes collapsing) around his characters who happen to be in Italy. “One of the most American things to do is to assume that things are different here,” says Gallagher. “But Italians get stressed too. ….I love Rome, but I am not always in love with it.”

The main character, Susan, 28, a fugitive from the law, lands in Rome with a fake passport and no plans to return to the States. Already disturbed when she arrives, she clutches to the notion that Italy can — with all its beauty and warm-hearted people — make her twisted American sense of self complete and erase her emotional baggage.

As Susan makes her way toward Tuscany, which considers heaven on Earth, she finds stability on her own sense of self-destruction. Uncannily needy, she attempts to impose a friendship on her roommate, Pamela, who is in the midst of a nervous breakdown as she tries to finish medical school.

Soon after settling into her apartment, Susan becomes involved with a man 50s who had left his small town in Tuscany in disgrace. He returns with Susan in virtually the same emotionally state as when he left. In the United States, meanwhile, Laura, a young woman married to a much older man, is recovering from amnesia. Her obscure relationship with Susan unfolds as she regains her memory and reevaluates her identity.

Concept of identity, says Gallagher, help drive the screenplay. “When you meet fellow English speakers, the mask is off,” says Gallagher. “The dark side of expatriate living is that in some way you are trying to run away from yourself. There’s a desire to escape from other people’s perceptions of you.”

Perhaps the real dark side of Italy will come while muscling through his first film in a place notoriously bogged down by bureaucracy. The Rome Film Commission asks for between €250 and €400 to shoot in front of historical landmarks. Permits are difficult to obtain and the production company has to shoot on a day chosen a few weeks in advance. Despite the details, Gallagher remains undaunted and aims to wrap up the film in six to seven weeks. “A lot of directors just do it,” he says confidently, following their lead and his own expectations.