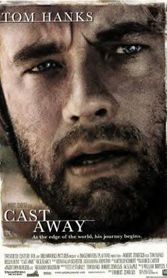 Maligned for its strangeness, this is still a brave study of introversion, near-madness, and salvation — though the latter is hackneyed. FedEx executive Chuck Noland (Tom Hanks) survives a plane crash but finds himself on a deserted island where to keep from going mad he strikes up a relationship with a deflated volleyball (Wilson).

Robert Zemeckis’ movie depends so heavily on the bearded Hanks that the movie might be called, “How Tom Hanks perseveres.” The problem-solving on the island — Robinson Crusoe-style — is more interesting than later reparations on the home front. Oddly, civilization is the film’s weakness.