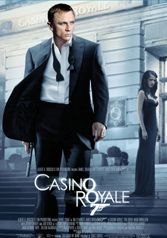 In the five-decade-old James Bond franchise (21 films), only Terrence Young’s 1963 “From Russia With Love” rivals this one in terms of cinematic quality. Young used Bond to fill his thriller filled with odd characters and nervous situations. Director Martin Bennett does much the same (chagrining purists in the way Tim Burton caught darts for making the first “Batman” so moody). Bennett reinvents Ian Fleming’s action spy by first sketching out a man.

Campbell deftly inserts Vesper Lynd (the French actress Eva Green), who nearly steals the movie as well as Bond — shades of Diana Rigg in OHMSS. He falls for her not as a Bond Girl, but as a woman whose confidant humor completes her beauty. Verbally, their first encounter is out of 1930s. The movie is admittedly too long, and Craig’s monkish sensibility can sometimes feel out synch with murder. That aside, “Casino Royale” is a surprisingly mature thriller that recasts a long lost pedigree.