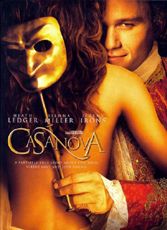 In “Casanova,” the notorious eponymous Venetian playboy, played here by a wooden Heath Ledger, finally meets Francesca (Sienna Miller) the one girl who won’t swoon at the very mention of his name. In a bid to win respectability for himself (the Inquisition is hot on his heels) he decides that he must have the one thing that he can’t. Because he knows that an upstanding young girl like Francesca would never be caught dead with a man of ill-repute such as Casanova, he concocts a disguise in order to get close to her.

Billed as a “stylish and sexy comedy for grownups,” the film is a study on caricature and stiltedness, all wrapped in a pretty package — Venice. Predictable from the start, the film skirts its banal plot by digressing into camp. Directed by Lasse Halström, who made the well-received but decidedly un-campy “Cider House Rules” and “What’s Eating Gilbert Grape,” Casanova succeeds only in the miniscule moments when Jeremy Irons is onscreen as the bumbling inquisitor Bishop Pucci, such as when he crosses himself after seeing a flying hot-air balloon, saying “witchcraft!”

Surprisingly tame for a movie about the world’s most famous lover, the movie does work as a break from some of the heavy overly important films that take themselves much too seriously. That doesn’t mean it’s good.