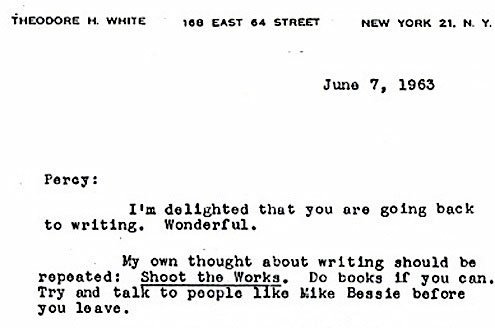 Letters from J.P. Morgan and Teddy White.
I

’m not sure why I keep the vintage red cardboard folder, tied closed by a frayed elastic band stretched not by use but age. The band lacks bounce.

What’s inside I look at only from time to time, these brittle Casablanca snacks. They are marriage certificates, unsigned contracts, emotional ultimatums, telegrams. In an Manila envelope are a pair of aviator Ray-Ban glasses, pretty accessories to an unromantic war. Elsewhere is a terse note from Benito Mussolini’s male secretary demanding an answer to a query that isn’t stated. A neatly-typed note comes from a man who thanks my father for his “intelligent and sympathetic contributions” to enterprised. The handwriting contains an elegant “j,” a smaller “p,” and a rising “m” — J.P. Morgan, 1924. There is also a hand-scripted note of a second wife that says: “I came the office but you were not there, so I took a walk, alone…” It is on the Rome stationary of the The Associated Press dated 1926.

Another favorite is a Teddy White letter from 1963. A rival in the 1940s and 50s, White had just published the first important postwar campaign narrative, “The Making of the President,” about John Kennedy’s narrow victory. “How’s this for an idea for a book: The year 1934 in Europe, what with the riots in France, the assassination of King Alexander, the Dollfus thing in Austria…”

“Shoot the Works,” he advised. He underlined the encouragement. I don’t know if my father answered. A few months later, Kennedy was dead.

There are also wads of telegrams, antiques I recognize.

Once a writer of late-night garbled passion, I befriended the graveyard workers at Rome central cable office at Piazza San Silvestro. LT, my telegrams began: Lettera telegramma. Letter telegrams, sent overnight, cost less by the word (they were called “night letters” in the United States.)

About a decade ago I found and framed a telegram to my father dated August 23, 1946. The tickertape words are glued with typically uneven zeal on yellow paper imperiously marked Western Union. A telegram was an upper case email precursor given authority by Western Union, which all but ran the world’s word traffic. The range of its monopoly made the company name a synonym for the medium; Xerox would follow with photocopiers.

Dorothy Schneider, an editor at the publishing house of Harcourt and Brace, sent the telegram. It is stamped 4:23 p.m. and utters one sentence: WE WANT TO PUBLISH DARIO STOP RING ME

How, I wonder, did he take that news? “Dario” was his first book, a semi-autobiographical novel about Italy and his relationship to opportunist Curzio Malaparte. Imagine the hot afternoon. Imagine drinks at the St. Moritz Hotel. Maybe toast among friends. There was a woman whose name I never learned. There were many woman. He loved attention.

Telegrams tyrannized, assuring the best news or the worst. They were loathed — on the home front — during combat, moan-makers.

The irrevocable, war aside, makes less sense now. Consequences are more malleable. Another email, another chat — this is a planet of second chances despised as unfair when it fails to provide them.

There is another telegram, from 1940, which reads: WAR PREVENTS ARRIVAL.

There’s also one addressed to me that says: DONT LOVE YOU STOP DONT CALL

No apostrophe or period, no upper or lower case. Weary operator were spared the additional keystrokes — as well as upper and lower case. It was cleaner that way, cleaner and cheaper. Sawing it down to get to the point.

The telegram does have a signature.

But even today I can’t get beyond that persuasive definitive. It startles me: