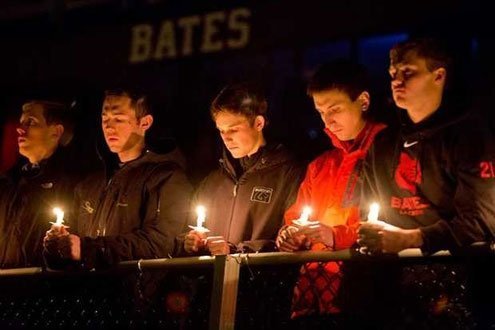 Bates College vigil for athlete John Durkin, a junior who died in Rome in February.
&

#8220;We shape our lives, and we shape ourselves. The process never ends until we die. And the choices we make are ultimately our own responsibility.” — Eleanor Roosevelt

Before Bates College student John Durkin was struck by a train and killed in a tunnel near the Vatican in February he made a choice: he chose to drink too much. What led him to that decision and what actually happened to put him in front of the train is irrelevant. His actions led to his death.

The heads of American college and university programs in Italy have highlighted drugs and drinking — emphasizing the latter — as the greatest threats to the safety and security of their students. Not thieves, motorists, random violence or overeating — drinking.

In 2012 Italy raised the minimum age for the sale of liquor from 16 to 18. The change came about as a result of European directives and Italy’s direct interest in limiting growing alcohol consumption among its teens. Enforcement is now strict to counter the recent tendency of Italian youth to assimilate the excesses of other cultures.

The drinking age of 16 remains low compared to other countries, as wine is a part of daily life in the typical Italian home and the sudden “freedom” to drink for Italians has no real significance.

In 1984, the United States enacted the Uniform Drinking Age Act, which called for the withholding of federal highway funds from states that failed to hike the minimum legal drinking age to 21. By 1988 all states had complied, measurably reducing the level of alcohol consumption and highway deaths. But the measure is of no help to college students leaving home, some for the first time, and entering a foreign environment where they can purchase alcohol at age 18.

That American students drink to excess under these circumstances doesn’t surprise psychologist Elaine Luti, who has taught and counseled college students at universities and study abroad programs in Rome for more than 30 years. She understands that while students’ intoxication mirrors that same malady in the U.S., it also reflects a particular American cultural remoteness that is far more insidious.

Luti’s counseling has led her to observe many students who have grown up without anyone to support their emotional needs and with whom they can form close, secure attachments. Economic mobility and modern life in general has its victims.

The imposing of “time outs” for emotional outbursts and a “distancing” from any immediate problem — distance that can take the place of staying close and working through a problem — has encouraged isolation and alienation in children. Many learn to avoid their emotions, obliged instead to “get over it,” “suck it up” and “think on the positive side.” After all, “no one wants to be around someone who is down.”

Performance has also become key, with extra-curricular activities leaving little time in which to decompress. As a result, the emphasis in the U.S. has shifted away from who a child is to what he or she does. With performance pressures elevated, often in an emotional vacuum, the quick fix of anti-depressants has become pervasive.

Students attending study abroad programs can sometimes find making meaningful connections with other students difficult. Drinking can be seen as a way to socialize and escape personal problems. It can evolve into the single most important way of coming into contact with deeper emotions.

While fraying at the edges, Italian culture remains grounded in its centuries old tradition of tight family structure, evident in the support and care given to children by their parents and close knit extended family.

These are different worldviews, and how American student visitors adjust their cultural vision to their new surroundings may well represent the most important part of their foreign journey.

When Amanda Knox was reported to have turned cartwheels in a Perugia police station while awaiting police questioning in connection with roommate Meredith Kercher’s murder, it struck me as a metaphor for the way many American students behave when in Italy. Knox has denied the gymnastics, saying instead that she was practicing yoga.

But the image of a young American student giddily responding to passing personal forces, regardless of surroundings and circumstances, holds fast — and come back into focus as a result of John Durkin’s actions.

By all accounts the Rye, New Hampshire-born Durkin was a special young man, athletically gifted, well liked, and an academic achiever. But on that February night in Rome he drank to the point that going home entailed wobbling in the wrong direction through a railway tunnel in the early morning hours.

At that instant, happiness, problems, excuses, intentions, innocence or blame stopped mattering. What did matter was making the choice to drink responsibly, and making it while he still could. But he made a different choice, one that tragically pushed him toward the wrong end of a locomotive.