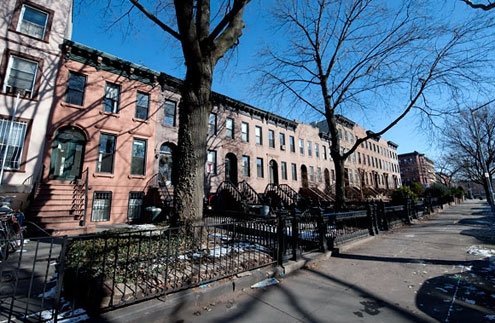 lla and Jake walked into the party together. That is to say, they arrived at the same time and waited in the blistering cold wind for someone to come downstairs and open the door.

They introduced themselves as they made their way up the filthy staircase to a graffiti-covered hallway littered with cigarettes and beer cans. Art-looking types milled around. It was Ella’s first loft party in Bushwick, Brooklyn, and she could tell within minutes that it would probably be her last for a very long time.

Not that she couldn’t appreciate spontaneous performance art, and the living quarters were impressive to say the least. If a tree house could exist inside of a warehouse, this would be what it looked like. Ladders and crudely fashioned staircases joined a series of cubbyhole-like rooms, where bearded and fedora-clad musicians, designers, and miscellaneous artists teetered dangerously close to the ledges with drinks in one hand and cigarettes in the other.

Ella and Jake went their separate ways at first. She joined her friends, who were already liquored. They pounced upon her like a band of monkeys. He parked himself near the kitchen table and popped open a beer with a work acquaintance.

Ella hadn’t noticed at first, but once he removed his hat, Jake had a full head of golden brown curls, much like her own, and his cheeks were still flushed from the cold. When she moved closer she caught him laughing, his smile burst open and his brown eyes twinkled. He looked very much like someone she still had an occasional crush on, which made him instantly attractive. She stepped in closer with the excuse of needing the bottle opener and offered a playful “Hello again!”

He nodded hello, but stuck to his conversation.

Ella felt a nothing-to-lose boldness (maybe it was the wine she’d had at dinner), and asked him if he’d been at a concert the week before. She’d seen someone who looked exactly like him… (pure invention, sort of.).

He shook his head, but wanted to hear more about the doppelganger.

“Well…” she began, “He was standing in front of me at a Django Reinhardt concert and he was identical!”

Jake twirled around and winked at her over his shoulder. “Check me out from behind. Still the same?”

She laughed and stepped in closer. Their conversation took a million turns as friends rotated in and out. But within minutes, she knew what they had in common.

Neither one owned a television or knew the name of pop stars. Both loved Karaoke, sometimes talked out loud to themselves, were working on experimental video marketing projects, and were vain enough to have whole albums of photo self portraits.

As they stood together against the wall, he put one hand on her hip and squeezed. She still had on her jacket, so he curled his hand around her waist, where she covered it with her own.

Eventually the circle around them dissolved and they were alone. Some sort of contest was forming on the central floor, and so they made their way upstairs to check out one of the upper loft rooms

There they collapsed on a pile of coats and watched the party below with a mix of horror and amusement. He pulled her closer and ran a hand up the back up her neck, under her scarf, and dug it deep into hair. Their conversation lilted and flowed, and every so often her would pull her face close to his, which made her gasp and her lips snap open. But he wouldn’t kiss her. Instead he looked at her and his eyes said everything.

They were briefly interrupted by his friend, who wanted to say goodbye and ensure Jake got home safely. Ella said she had the number for a car service. She’d take care of him.

While they spoke they shifted their bodies ever so slightly until the entire length of their thighs touched and they could feel each other’s breath when they spoke. And then he whispered that he wouldn’t kiss her. Not here in front of so many people….

When their eyes grew heavy and she could smell his hair on her hands, they decided it was time to go. He lived in Astoria, Queens, the opposite direction to her home in Carroll Gardens.

In the backseat she burrowed her face against his chest while they flew down empty streets in the direction of her apartment. He smelled clean and his warm fingertips danced across her cheek.

Finally, in her bedroom, with no one around, he kissed all of her.