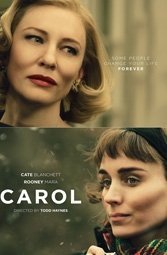 Lush colors; patient close ups and a note-perfect recreation of a bygone era are the visual emblems and deep esthetic pleasures of a Todd Haynes movie. With his 2002 “Far from Heaven,” Haynes put those techniques to powerful use in depicting the bottled-up anguish of a gay married man and the suppressed attraction between a white woman and a black man in the 1950s.

With his latest film, “Carol,” Haynes returns to the 1950s, this time gently portraying the love story between the glamorous, confident and married Carol (Cate Blanchett) and the girlish, often unreadable Therese (Rooney Mara), a burgeoning photographer who works in a New York City department store. Screenwriter Phyllis Nagy is careful to stay a step away from underscoring the now galling sexism of the era, resulting in a subtle adaptation of the novel of the same name by Gothic writer Patricia Highsmith (who also brought us the Ripley series).

The pace is slow and the view coolly neutral as we watch Carol advance on Therese, all lingering hands on shoulders. Wide-eyed Therese, hungry for feelings her fiancé is not providing, willingly partakes in the seduction. The already high stakes of the relationship —1950s America was categorically homophobic — spike when Carol’s husband, aware of her sexual tastes, threatens to take their daughter from her to keep her in the marriage.

Shades of Ripley appear in the plot as he tries to blackmail her. As Carol fights to keep her daughter, it seems all too inevitable how things will turn out. And then, in a final sequence that is stunning in every sense of the word, an ending is delivered that busts through not just our view of the two women, but the limits of our own expectations, too.