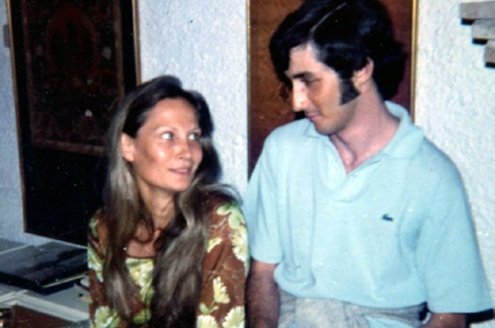 y favorite photograph of Carmen Scarpitta has me perched on an armrest staring at her in dim-witted adoration. Looking at the photo now I know that she must have seen the smitten side. It suited her. At least it did then. She was absolute; I was a boy. In the photo, she was 33. I was 19. She acted for Fellini (in “Casanova“), doing what he told her, or not, depending on her mood. She took orders from no one and quarreled effortlessly. Rome barely contained her. I meanwhile attended Columbia University, a shambling bit of sulky backdrop to what was then New York City’s all-encompassing decay. She’d already had too many men. I’d never had a girlfriend. I stared at her with all this in mind.

Carmen was my mother’s close friend, the daughter of a wartime connection. She was a mix of disinterested sexuality and teasing squared between passion and pose. Carmen’s father was Sicilian and her mother Polish like mine, both of them exiles from the torments of 1930s (she was born in Hollywood; I in Paris). But Carmen’s mother was gone so she convened close to mine. And looked at me with those probing eyes I gladly mistook for loving interest.

Carmen was her own out-take, larger-than-life, or eager to be it. Cheekbones gave her beauty its vigor. She smoked cigarettes until the acrid ash drooped suggestively. But she always caught herself. Nothing fell. Not in my eyes. She drove a sports car, a convertible, and when she tired of Rome she flew to Los Angeles, her other home. She felt freer there, she said. She spoke impossibly perfect English, a supra-national lilting English that seemed to incorporate Sicily, Poland and L.A. She was without specific nationality (like most Poles after the war). When she set me up to talk with Fellini — it would be my first major interview — she said, “Don’t let him bother you. He’s a big baby.”

The big baby humiliated me, mocking my Italian, and Carmen chastised him. He was far nicer the next time.

I’d like to say I remember where we first met, the place and the details. I’d like gratuitously to add that slice of drama. But I can’t. Carmen simply appeared one day, introduced somewhere as my mother’s friend, and I hormonally morphed her into a teenaged summer myth. I saw her at the beach, at a pool, in a living room, beside my mother at dinner. They spoke a visionary, accelerated Italian I barely understood. I said nothing. I just watched.

“So, Christopher, do you have a girlfriend?”

This was Carmen talking. I didn’t of course. She was it. I’d arranged it all in my mind. Boys do that. Later, as predatory men, they can forage sexually amid body parts. But the beginning is downed telephone poles and startled, fallen wires sizzling for days on end.

She did nothing to shut down the power. I once sat beside her in the sports car bound for Tuscany, where my mother was staying at a thermal bath. She de-hitched the Fiat’s top and we raced up the country. Our speed-teased hair got tangled and we laughed. She told me about a failed love affair. He was moody. Like a comic book character, she affected his scowl. “He’s always that way,” she said. “But I’m also a handful.”

I saw Carmen a dozen times in the summer of 1973 and a few more times the next summer. My mother brought me up to date on her films and love affairs, neither one producing prosperous results. She talked back too much. The Polish-Sicilian alchemy – desired time and again – lost its allure when she wouldn’t be kept, when she drove off with the top down. She got a part in the original film version of “La Cage au Folles (her French was fluent), but little happened after that. The film industry, globally unkind to stubborn women, used her incidentally. She had a bit part in a 2001 film by Bernardo Bertolucci’s brother Beppe; an inadvertent reflection of a terminus already arrived at and aloofly passed.

She never married, had an apartment in Rome, and a home in Baja California. Apparently she died in the latter. Friends implored me to search the Internet. Only a trifling piece from Il Messaggero came up. “Addio a Carmen Scarpitta,” it read.