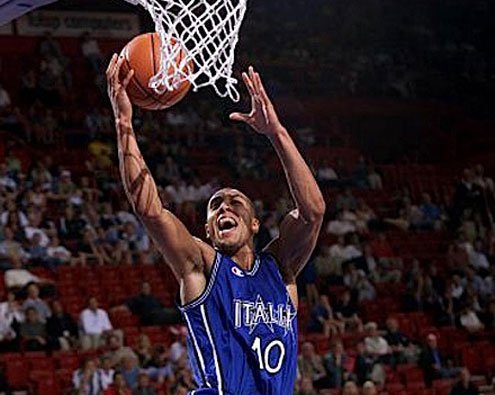 Myers is among three players in Italian history with more than 10,000 career points.

Carlton Myers’ resumé reads like a highlight reel. He was the Italian standard-bearer at the opening ceremonies of the 2000 Sydney Olympics. In a 15-year pro basketball career, he’s won an Italian and European basketball championship. He’s among three players in Italian history with more than 10,000 career points — the others are Brazilian Oscar Schmidt and all-time leading scorer Antonello Riva. In 1995, while playing for Rimini, Myers scored 87 points, setting Italy’s all-time single game points record. The muscular guard (1.92m/89k) averaged a team-leading 16.3 points a game in pacing Italy to the 1999 European title (Italy defeated France), its first-ever European championship. Overall, his career scoring average is an elite 21.2.

Born in London in 1971 to a Jamaican father (a professional saxophone player) and an Italian mother, Myers, 32, grew up in Rimini and began his pro career at 18 with Marr Rimini in March 1989. He later played in Pesaro and Bologna, where he paced Fortitudo Bologna to the national A-1 club title in 2000 — A-1 is Italy’s top basketball league.

Myers is winding down his career in Pesaro and has recently turned toward a second career in modelling. He has a web site featuring his look, www.carltonmyers.it. Myers is outspoken on race issues, frequently decrying intolerance in Italian sports and society. Fluent in Italian and English, he spoke to Paul Virgo.

You’ve had an extraordinary career. What moments stand out?

Many, some related to basketball. But many others weren’t. One was when I carried the Italian flag at the 2000 Sydney Olympics. Then there was the championship victory (Editor’s note: with Fortitudo Bologna, his only national title).

Do you remember how you felt carrying the Italian flag?

Excited, confused … a series of emotions that are difficult to explain. Afraid as well, because of the responsibility I had been given.

Do you see yourself as a role model for black Italians?

You should ask them. I try to be a good example above all for my son (Joel, 8), then obviously for everyone who watches me and judges me too. Yes, I try to be a positive example. Often I manage, sometimes I don’t.

When I read that Umberto Bossi, a government minister, has said we give a house and a job to every “pingo-pongo” that comes to Italy — well, what point do you think we are at? (Myers switches from Italian to cockney-accented English) I mean he’s supposed to be an Italian politician.

In basketball, there haven’t been many racist incidents. It’s more of a problem in soccer.

I believe a few words from a sports personality who is watched by millions of people — children, teenagers, the elderly — is worth much more than thousands uttered by Fini, Berlusconi or D’Alema. If a Beckham, a Totti, a Maldini or a Del Piero says something, then Bang! The little kids go “Oh, did you hear what he said.” It’s not there. Maybe they’re not able to express themselves. But you don’t need to use fancy expressions. A few words that show there’s feeling behind what you say are enough.

You’ve said before that soccer players should simply refuse to play when there are particularly bad racist incidents.

Why don’t they just walk off? Who’s going to say anything to Maldini if he says “Right, lads, we’re not playing today?” What could they do, kick him off the team? They haven’t got the power [to do that to Maldini], especially because he’d be doing something beautiful, positive. Fuck the money! Who cares about the money — if you believe in something, you’ve got enough money. Muhammad Ali didn’t go to war and took on the whole nation because of what he believed.

You spent the first nine years of your life in London. Do you still feel British at all?

Of course. It’s like a child being adopted by another woman. That child can never stop loving its first mother. I was born in London. I could never say “Oh, I hate London.” I could eat beans, bacon and eggs every day. (Laughs) It’s a part of me.

Over the last ten years, you’ve been Italy’s most important player. Do you think you could have made it in the NBA?

Only God can answer. I’m sorry now that I didn’t go and give it a try when I had the chance. Life is perhaps too good in Italy to leave. I regret my decision.

Do you think the NBA will eventually go global? Can you imagine a truly international championship with teams like the Shanghai Hornets, the Belgrade Arrows?

To tell the truth, I don’t really see a great future with regards to everything that’s happening around the world. It’s been going on for years, wars and all that, and I think it’s getting worse every day. I think we need to sort ourselves out in certain situations and start thinking about having peace all over the world. You can’t just shut your eyes and say “Oh, 10-15 years from now, we can have a team in China, a team in France, let’s do this.” There are too many problems at the moment.

Is sexual temptation a natural by-product of fame, or is the NBA simply decadent?

I’m not capable of judging anything. One thing I can say is when you are famous, popular, and when you are black, you need to keep four eyes open. You need to be very careful.

Are there any sports figures you especially admire?

Obviously Muhammad Ali is at the top. But, you know, I admire Michael Jordan, like 99 percent of all basketball players.

How do you unwind after a key game?