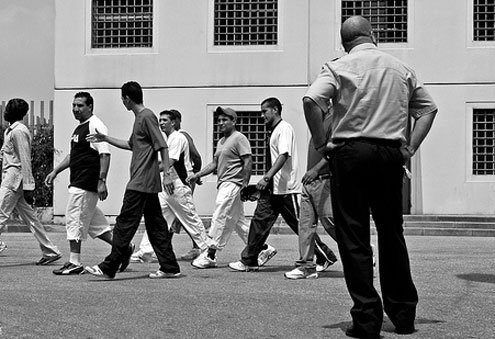 hen my GPS signals our arrival at Bollate Prison, just outside Milan, we are in a barren field. We see only other fields and, in the distance, a cement block building. It turns out there are several of these buildings, flat and gray, but with brightly colored windowsills facing the road. We wait in the parking lot for other choir members to arrive. A city bus drops off a group of women carrying bulging plastic bags. They don’t approach the prison but walk away.

After a security check, in which our passports are matched to photocopies we sent in months ago, our names are called and, one by one, we enter. Bollate prison was inaugurated twice: once in December, 2000, by center-left Justice Minister Piero Fassino and, a year later, after elections, by his center-right successor Roberto Castelli. This prison is unique in Italy, and in Europe, for its commitment to rehabilitation and vocational training in everything from equestrian care, to information technology.

The prison can hold over 900 inmates but, because of lack of personnel, it isn’t full. For example, there are only 40 women here because of insufficient policewomen. Most inmates are serving sentences of four-to-10 years; they’re not dangerous and not connected to organized crime. Ten percent hold jobs outside the prison. There’s a group imprisoned for drug related crimes and another group transferred from Milan’s juvenile prison, Beccaria. Cell Block 6 holds sexual offenders, who receive treatment for one year and then join the other sections. All Bollate inmates requested transfer here from other prisons. Their acceptance was based on their potential to benefit from the innovative program. They had to agree to prison terms and conditions, including living in close quarters with sex offenders.

We walk along a wide hallway, past metal gates leading to cell blocks. Gates and cell doors remain open. Men stand in the corridors chatting. Some come to say hello.

One middle-aged man’s twitching grin and aggressive eyes make me glad he’s not running around loose. A friend whispers, “They’re not all Cool Hand Luke.”

The prayer service is held in a theater, built and operated by inmates. We set up the electric piano with its adaptors, cords and amplifiers. When the choir is positioned along the back of the stage and church leaders, representing six religions, have taken their seats in front, the inmates quietly enter: Homosexual men of various ages sit in six rows of white plastic armchairs in front of the stage. For their safety, they’re separated from the other men. Women sit in the first four rows of bleachers, forming a barrier. Men occupy all the rows behind, each section sitting together.

A Romanian Orthodox priest, with flowing beard and black robes, offers the first prayer. Then our choir sings. While an Albanian priest speaks, a late-comer hurries in. He pulls off his black bomber jacket revealing muscled, tattoo-covered arms. From all over the bleachers men rise joyfully. They seem surprised to see him. They welcome him silently with hugs and handshakes. He takes his seat with the youngest group, next to someone who could be his twin. This one hugs him emotionally and continues to wipe his eyes with the back of his hand. They sit arm in arm. The audience listens respectfully to our next song, although men continue to reach over and pat the latecomer’s shoulder.

The chaplain announces that we may shake hands as a sign of peace. The bleachers are off-limits but we shake hands and chat with men from the white plastic chairs. I’m struck by how much warmth and goodwill is expressed by prisoners who come forward to welcome us.

After this, a prisoner comes on stage to read his testimony. He has a large stomach and a monk-like ring of hair. He says that, because of his crime everyone hates him, even the guards. Through catechism, however, he has learned that we’re all equal under God; there’s no hierarchy of evil; he’s no worse than anyone else.

The late-comer stands up and shouts, “Not true. You’re worse than everyone here. You did something bad. You are bad.” He marches out.

The testimony man says that he, at least, tries to do good. For example, he stands near the buzzer to announce visitors and he called a guard when his room-mate tried to make a new prisoner eat what was in the toilet.

At this, a group of young men gets up and leaves. The testimony man smirks. Then more and more leave, men of all ages, until the upper bleachers empty, leaving only homosexuals and women. The testimony man watches with a self-satisfied sneer. When they’ve all gone, he sits in an abandoned seat.

Later, the chaplain tells us that prisoners have difficulty tolerating certain kinds of sexual offenders.

As we leave the building, we pass large gardens, untended and overgrown. Row after row of tomatoes, much of the harvest over-ripe, are rotting in the dirt.

We pass a fenced-in, grassy yard where men, in turns, receive their families. Men and women sit at picnic tables. Children play on climbing frames. One young man leads a little girl riding a pony. He waves to us and calls goodbye. It’s the late-comer who walked out.

Driving away along desolate roads, still in view of the prison guardhouse, we see the busload of women that we noticed earlier. By now they’ve changed into their work clothes: high heeled shoes, miniskirts, bare breasts. One, still a child, pale, thin, blonde, sits at the edge of the road, barefoot, wearing only a torn shirt.