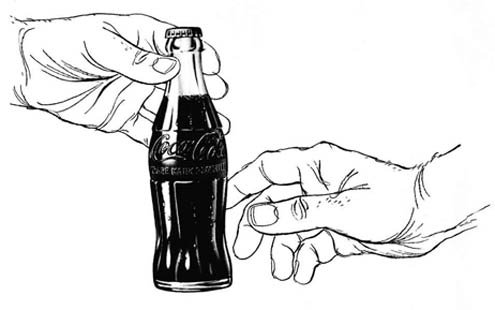 When the D'Arcy Agency Coke account went to McCann-Erickson in 1956, its ad read: "We hand it on with pride in a job well done..."
I

n all likelihood, the world’s first commercial oven appeared in 171 BC somewhere in the Roman Forum. Within years, its existence had keyed a culinary breakthrough. Millions of common people who for centuries had eaten only puls, basically a porridge of cereal, water, salt and fat, had fallen in love with bread, and with it vinum, wine, once the property of aristocrats.

Early on, the Italian peninsula lacked abundant vineyards. But imports arrived thanks to the network of trade routes linking the Roman Empire. Wine brought with it curiosity, and desire. According to both Plutarch and Pliny, the Gauls crossed the Alps in search of the so-called “Nectar of Bacchus,” which is how Sicilian-born Greek historian Diodorus Siculus referred to wine in his “Bibliotheca historica,” among the earliest multi-volume almanacs. An amphora of wine was prized enough to fetch a Roman merchant a slave.

Vineyards soon emerged in Britain and Iberia, as well as Gaul (throughout Europe, in fact). Business and political strategies also began merging. Rome legions and centurion (commanders) carried kegs of wine to solidify their status as “lawgivers,” demonstrating how the “nectar” had taken on mythical status.

These details and more emerge from a close reading of “Roma Caput Vini,” a fascinating Italian book published by Mondadori in 2011 by three experts, Giovanni Negri, an Italian journalist, politician and wine producer; Elisabetta Petrini, an Czech-born Italian researcher, and Attilio Scienza, a professor of viticulture the University of Milan as well as a contributor to French and British wine journals.

Their research is riveting.

The authors say wine played a key role in the so-called Pax Romana, Rome’s refusal to impose its religion, language and customs on its colonies, preferring the notion of a melting pot. Planting vineyards became the expression of seeking roots in a place, a clear political message from the empire to coveted portions occupied territories (leading to the Latin expression hic manebimus optime, or “here we’ll stay.”)

In 92 AD the Emperor Domitian issued a stern wine edict intended to offset a dramatic wheat shortage and encourage the growing of cereals to combat famine. He thought lands reserved for vineyards could be better used for other crops. The edict imposed a ban on the planting new vines in Italy, ordering their removal to other countries of the Empire.

But few Empire vineyards paid much attention to the law, continuing wine production, albeit illicitly. (“The Gaulish wine-growers took their sacrifice with a very bad grace, and the legions had to be brought to enforce obedience,” wrote French food historian Maguelonne Toussaint-Samat.)

Probus picked a white grape variety called Heunisch, which was subsequently planted throughout the Empire, including in France, Dalmatia, Germany, Britain, and Iberia. Heunisch is the genetic forerunner of many grape varieties grown in Europe today.

The examples are legion. Bordeaux, for example, was once known as Burdigala Gambetta; Cabernet was Vitis biturica; Romanèe Conti, Vosne Romanèe, Romanèe Saint Vivant each derive from Romanae; Burgundy was Pagus Arebrignus; and Pinot Noir was Allobrogica.

Enter DNA. A team led by American researcher Carole Meredith and Scienza, the viticulture professor, recently discovered the present of the now-rare Heunisch in some 78 varieties.

More interesting still are the cultural parallels between Roman Empire priorities and those picked up on by the United States millennia later, which the notes with enthusiasm.

Rome created an export market for bread and wine. The U.S. did the same with McDonald’s and Coca-Cola. The Romans “borrowed” the Dionysus myth from Greece made transformed it him into Bacchus for home consumption, leading to Bacchanalia festivals and their association of wine with fertility. The U.S., seeking a standard for public architecture, borrowed liberally from the designs of architect Andrea Palladio (to the point that in 2010 Congress passed a resolution expressing its gratitude to him on the 500th anniversary of his birth).

Both ancient Romans and modern Americans had a practical, direct and pragmatic approach to what they didn’t have but wanted. They took it from others.

It’s no surprise that Manhattan’s perpendicular have a great deal in common with Roman encampments and that Pompeii, with its bars (thermopolia), inns (cauponae), taverns (popinae) and brothels (lupanare), was in essence the Las Vegas of its time, with an emphasis on, money gambling, and sex.

The book provides an interesting reminder that wine and Coke, though their origins are different, played a strikingly similar role in each of the two civilizations to which they belonged, defining an not only an age but the perception of its people.

Thanks to the genius of William D’Arcy and his St. Louis ad agency, Coke grew into an American status symbol associated with patriotism and clean living. After Pearl Harbor, company President Robert W. Woodruff announced the company would sell a bottle to American servicemen anywhere in the world for a nickel. The policy worked. “It’s the little things, not the big things that the individual soldier fights for or wants so badly when away,” one soldier wrote home during World War II. “It’s the girl friend back home in a drug store over a Coke…”

Two thousand years ago the way to the heart of a Roman legionnaire, the Empire knew, was sufficient vinum to keep him content.

If only enemies of Rome hadn’t gotten the same idea.