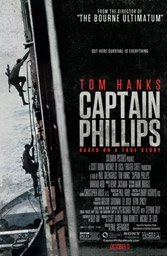 Paul Greengrass’s uncompromising reconstruction of the 2009 Somali pirate hijack of the U.S. containership “Maersk Alabama” en route from Oman to Mogadishu is a rare example of gripping, professional filmmaking that honors a historical outline while delivering fiction of the highest order. It is action moviemaking that works hard to create full-blooded characters, never once letting the ferocity around them overrun their individual destinies.

Here, Tom Hanks is Rich Philips, a longtime merchant ship captain from Vermont who, like his wife, wonders what the competitive world is coming to — until it comes directly to him in the form of half-a-dozen Somali pirates determined to board and hold his ship for ransom, the quick-cash custom in a Horn of Africa wasteland run by local warlords and destitute beyond commonplace Western comprehension. Phillips’ chief “adversary” turns out to be a youthful, razor-faced brigand named Abduwali Muse (Barkhan Abdi), who nicknames him “Irish” and refuses to recognize he’s out of his depth even when U.S. naval forces eventually close in.

The substance of the story is the cat-and-mouse game between Muse and Phillips, who though from culturally separate galaxies are tossed into a claustrophobic no man’s land. Greengrass gives the pirates wide berth, and his first-time Somali actors respond with captivating bravura. A story easily lost to physical violence stays focused on faces, moods, paced by Musi’s near-tyrannical insistence that “is all going to be okay,” which, in the presence of his khat-wired cohorts, sounds more like a threat.

This is a culture clash thriller played out on the open sea. Though Muse’s nickname is “Skinny,” he’s a no-nonsense child-soldier, and Billy Ray’s engrossing screenplay gives him depth of purpose. “Bourn” and “United 93” director Greengrass avoids sentimental pitfalls, sticking instead to a “just the facts” approach that the remarkable duo of Hanks and Abdi imbue with appropriate doses of machismo, deference and outright terror.

Abdi’s real-life story is to the point: His family fled Somalia to Yemen when he was seven, with Abdi working as chauffeur when discovered and cast. “I love America,” says pirate Muse, followed in nearly the same breath by “You come to our water. You have to pay.” Greengrass stamps this thuggish but subtle ambivalence on his story, after which it takes on a life of its own.