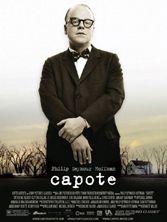 Though there’s a commanding performance by Philip Seymour Hoffman (2006 Oscar for best actor) as eccentric author Truman Capote, something’s not right. Eager to give Hoffman all the space he needs, director Bennett Miller puts him in a cage for two-hour viewing. The film hangs on his every word just as Harper Lee (Catherine Keener) depends on his intellectual approval.

Clifton Collins Jr. as Perry Smith, one of the two “In Cold Blood” killers, tries to focus Capote’s attention away from himself, lecturing against his single-minded vanity. But it’s soon clear Hoffman’s Capote reflects a Ptolemaic universe in which he’s a melancholy Sun King around which the camera rotates.

No doubt Miller intended the portrayal as one of self-aggrandizing shallowness, and yet Capote’s short shrift toward the world eventually rebels against the movie itself. His narcissism swallows his own story, leaving Hoffman to compensate with redundant affectation. As the late Heath Ledger allegedly remarked after Hoffman carried the Oscar: “I thought it was for the best acting, not the most acting.” Touché. Though intimate and calibrated, the film is dented by its own bruise.