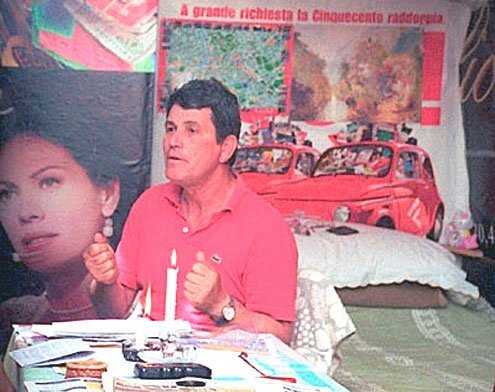 Todor Velkov, a Bulgarian elevator repairman, has installed carpeting, a sink and a shower in his dwelling.
L

ike many admirers of ancient Rome, Todor Velikov tends to romanticize its past. But while most relive history strolling through the Forum, necessity compelled Velikov to go a step further. The Bulgarian immigrant has converted a second-century grotto in the posh Monte Parioli neighborhood into living quarters.

“You could call it a cave. It’s definitely not a hotel,” said Velikov, describing his home.

Italian archeological officials say the 60-square-meter cavern was once used by a cult devoted to Anna Perenna, a Roman river nymph and the goddess of the new year. Cult members would gather under its vaulted ceilings to make offerings.

Velikov, an elevator repairman, has furbished his grotto dwelling with wall-to-wall carpeting, a gas stove, a kitchen sink and a shower. He has even landscaped its exterior with potted flowers. “Every situation has its romantic side,” added Velikov.

Grottos of the kind Velikov inhabits have become magnets for immigrant day laborers from Eastern Europe who view the caves as pennywise alternatives to conventional housing. Monte Parioli is a wealthy residential neighborhood whose cliffs overlook north Rome in the direction of Via Flaminia, a Roman road leading into and out of the capital.

Though the living conditions are a far cry from the gated villas that cap Monte Parioli’s panoramic hilltops, the grotto settlements have endured for years, making them a commonplace reality to many of those who live and work in the neighborhood and a source of intrigue to researchers.

“Almost by definition, these spaces are shelters,” said Marina Piranomonte, an archeologist who works with the state superintendent for archeology.

Piranomonte, who has studied the grottos and supervised excavations in the surrounding area, says the 20 Monte Parioli grottos could house up to 70 people, though police put the number closer to 30. While Piranomonte called the situation in which settlers find themselves “unfortunate,” she considers the caves structurally sound and safe to live in.

“Every now and then this stuff will fall,” said Andrej Lukas, pointing at small hunks of earth on his carpet. They fell from his “ceiling.”

Lukas, a Lithuanian auto mechanic who earns €900 a month working for a local Lancia car dealer, has spent two of his four years in Italy living in a grotto that adjoins Velikov’s. “But why worry?” he says. -“These caves have lasted thousands of years.”

City officials disagree. Antonio Saccone, president of the municipality in charge of Monte Parioli and an advisor to Rome Mayor Walter Veltroni, believes the constant foot traffic along makeshift stairways and patios used to enter the caves have dangerously weakened the hillside. “We can’t have people living like this in 2004,” he said.

Despite his concerns, Saccone has been unable to evacuate the caves. “Typical Italian bureaucracy” stands in the way. Any effort to clear out the hillsides, he said, requires the cooperation of the police, city health and sanitation departments, and immigration services. Saccone would also need the approval of the archeological superintendent to ensure that the clearing of the caves doesn’t damage an area that, despite its state of neglect, is still nominally protected by law. “The situation has become paradoxical,” he said.

Both Saccone and Piranomonte consider the settlements a unique example of archeological grounds inhabited close to the city center. Monte Parioli is about a hundred yards away from Piazza del Popolo, where Rome’s medieval walls rise.

They say that it is likely similar settlements exist in archeological sites in the capital’s loosely patrolled outskirts. “In the center it’s rare to find situations of so-called ‘abusive’ occupation, but if you go further out, to areas that are less monitored, it’s clear you’ll find these kinds of situations,” Piranomonte said.

Using ancient ruins is hardly a new concept in the history of the city, especially in periods when building materials have been scarce. The Coliseum was famously stripped of its marble to decorate Saint Peter’s Basilica in the 17th century.

Even cave-dwelling is something of a time-honored tradition. Duccio Di Paola, a professor of building economics at the University of Rome La Sapienza, says that caves and catacombs were especially popular during the post-World War II era, when hundreds of thousands of farm workers emigrated from the countryside to Rome seeking jobs and temporary housing. Cave life is simply seeing a revival because Eastern Europeans come to the city with fewer resources than other immigrant groups. “Fifty years ago it was Italians. Now it’s foreigners who see opportunities in the caves,” added Saccone.

Di Paola, whose office is a 15-minute-walk from the grotto settlements, also notes that real estate prices in the area run about €10,000 per square meter, which means the immigrants are in a prime neighborhood, albeit in caves. “[Being] able stroll the Piazza del Popolo whenever you feel like it. That’s a position of privilege no matter how you look at it,” said Di Paola.

Though Vladamir Akodyan hardly considers his lifestyle a privileged one, he can confirm the value of the real estate. While putting the finishing touches on the chain-link fence he’d erected around the entrance of his grotto, he complained that rents around Rome cut too deep into his €800 monthly earnings, a third of which he sends to his family in the Ukraine. “For two years I paid €200 a month for a bed in a room with eight other people. Finally, I said, ‘Enough, I can’t live like this!’” he said. Four months ago he changed addresses.

Stories like Akodyan’s are pervasive among his neighbors, who complain that many legitimate landlords won’t rent to immigrants, creating a black market of substandard apartments rented at gauged prices.

“I’ve been in apartments with no hot water, no privacy and little time to sleep. Here, I have all these things,” Lukas, the auto mechanic, said. The utilities available on Monte Parioli’s hillsides vary from cave to cave. Lukas’s features ceiling lights that run off a collection of car batteries stored beneath his bed. Others boast large water tanks rigged to networks of plastic tubing that approximate plumbing. Bathrooms are communal.

But the domestic bubble could be ready to pop.

Monte Parioli’s hillsides are part of a public complex known as the Valle delle Accademia. It contains the National Gallery of Modern Art, a number of international academic institutes and La Sapienza’s Valle Giulia School of Architecture. Since its creation in 1911, the complex has been largely neglected, allowing sections of its grounds to evolve into a patchwork of unmonitored areas including the hillsides. In January, however, researchers at Valle Giulia began studying plans to redevelop the area, spurring calls for the city to purge the caves.

Columnist Giuseppe Pullara, writing in Corriere della Sera’s Rome insert, accused Monte Parioli’s residents of turning a blind eye to the “metropolitan inferno” burgeoning next door. “Caves are caves, and that makes the people who live in them troglodytes, even if they’re well dressed,” he wrote.

Serving up aperitifs at a grassy terrace overlooking the city, bar owner Leonardo De Benedictis shrugs off the criticism. He has never visited the caves, but he knows them by reputation. “They’re just foreigners who need a place to sleep while waiting for better luck,” he said. Every now and then, his clients complain of smoke rising from hillside campfires. “It’s hard to know what goes on down there,” he said, looking over Rome’s dome-laden skyline, “Up here it’s paradise.”