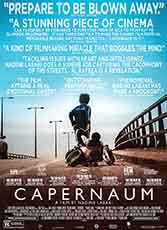 Zain (Zain Al Rafeea), the Lebanese protagonist of this powerful, realistic drama about life in a Beirut ghetto, is a child on the cusp of adulthood. In the opening scenes, he’s playing with his friends with scrap materials standing in for guns; then helping his younger sister, Sahar (Haita ‘Cedra’ Izzam), disguise her menstrual period to avoid being “sold” to a nearby shopkeeper (who is also the family landlord, played by Nour El Husseini); then, incredibly, serving for months as a single parent to the barely-walking infant Yonas (Boluwatife Treasure Bankole) in a tin-roofed shanty that lacks clean running water.

Zain is 12 (he thinks), but he’s also remarkably mature, if a bit stubborn: independent, principled, worldly, clever, and resourceful beyond his years (transporting Yonas in a cooking pot lashed to a skateboard while trying to find food and make a little money). These qualities help him weather the most extraordinary challenges and setbacks. Until they don’t. Then Zain faces a decision of consequence similar to one involving Sahar.

Unlike Yonas’s Ethiopian  mother — the serene and dogged Rahil (Yordanos Shiferaw), who has been jailed by immigration authorities — Zain is native Lebanese. Unlike the ruffians in similar films, he’s not a juvenile delinquent. He also has parents — poor, unemployed, burdened by a household full of young children, under enormous stress (“we’re insects,” his father tells him), and moderately abusive — but nonetheless, there. What he and Rahil share is statelessness: she’s an undocumented immigrant; he, although born in Lebanon, has no papers.

It would be too much to say that director Nadine Labaki’s production has a positive ending, though the final scene features a smiling Zain that we’ve rarely seen before, and the last few minutes, appropriately or not, pull back from the brink of despair that hovers over much of the story.

Except for a few elevated shots of tin-shack Beirut and its souk and one long shot of Zain and Yonas trekking along a highway, “Capernaum” cinematographer Christopher Aoun favors closeups and hand-held work that lend a deep intimacy to the family life that Zain has fled, to Rahil’s struggles to raise her child, and to Zain’s epic journey on the streets.

Convincing acting, interwoven credible stories, and exceptional cinematography set “Capernaum” apart from the many cinematic portrayals of poor, homeless children.Labaki’s moving feature is an outstanding entry into films about the underclasses.