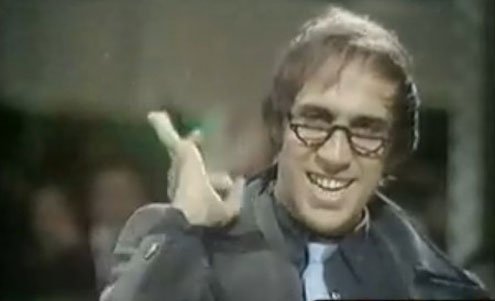 In the early 1970s, singer Adriano Celentano parodied Italy's confusing attraction to English with his gibberish song "Prisencolinensinainciusol."
I

was 20 years old and a newly arrived student living in Bologna when I first realized the power of language. Oddly enough, it wasn’t acquiring Italian that triggered the awareness — though that helped — but my status as a native, mother-tongue English speaker.

English, I quickly learned, was truly a global language. I was surprised if not utterly bewildered — perhaps naïvely — that so many of my international classmates at the Italian language school I attended spoke English with fluency and ease, most with only a hint of an accent. Outside the classroom, my new Scandinavian friends spoke eloquently of Obama’s healthcare plan, the Dutch shared their expectations for the upcoming winter Olympics, the Belgians described their experience backpacking through Nepal, and the Germans discussed the finer points of soccer. I sat fascinated, perplexed, and jealous.

How was it that I, who had devoted my studies, time, and a sizable chunk of my parents’ finances to learning Italian, remained so limited in my second language, while they were so superior in theirs? What was their secret? “I don’t know, I guess just watching a lot of ‘The Simpsons,'” a Swedish friend responded with a shrug. The best teachers were not found in the classroom, but rather in Carrie Bradshaw and Spongebob Squarepants.

Despite the vibrant presence of English in countless parts of the world, Italy has yet to absorb the language. Attempts by Italian leaders Silvio Berlusconi and Matteo Renzi to blunder ahead with what little English they know on the international scene have produced viral Youtube videos and nationwide face-palming. Italians just don’t speak English well, and they know it (in fact, popular singer Adriano Celentano poked fun at the fact in the early 1970s with a song that made gibberish from American-sounding lyrics). They shell out hundreds and even thousands of euros every year to help children and adults learn English.

University students, desperate to escape Italy’s crumbling job market, scramble to sign up for TOEFL and Cambridge exams. In short, English is an in-demand accessory so lusted after in this country that it conjures up images of the new iPhone or Louis Vuitton bag.

Italians’ tumultuous relationship with English has been explained in many ways. Dictator Benito Mussolini did, after all, ban subtitling media, instead establishing and heavily promoting a culture of dubbing that persists. Postwar American aid to Italy further supported dubbing to better circulate Hollywood movies. English schoolteachers here are rarely native speakers, and tend to conduct their lessons almost exclusively in Italian, making it difficult for students to be immersed in the tone and cadences of their second language.

Perhaps it’s due to the difficulty of making the transition from a Latin language to a Germanic one. Whatever the reason, I’ve found my English combined with Italy’s lack of English to be startlingly beneficial. The absence of my native language in this country has been just what the doctor ordered in shaping my experiences. From a social point of view, being an American and a possessor of the ever-elusive English language has made me far more interesting to my Italian peers. English is, after all, the language of New York City and Kate Middleton and “Friends.” It is mysterious and exotic and powerful, and it’s not lost on me that the majority of my friendships here have begun with a curious question about my language and culture. Language, I learned, can be social capital. Within the international community, English is typically the language in common, which has allowed me to converse with people from cities I didn’t even know existed.

But Italy’s neglect of my native language also helped me acquire my second language. Knowing Italian was a communications necessity, and awfully easy to practice. In an alternate universe, I imagine myself in Norway or the Netherlands, trying to speak basic Dutch or Norwegian before the speaker would inevitably smile kindly, and switch to English.

Most importantly, being a native English speaker has handed me endless Italian job opportunities — based less on my Key Club résumé than the good fortune of being raised in an English speaking country. As an English teacher, I was able to pay my rent and buy my groceries with a salary paid for by Italians looking to master l’inglese. When I’d had my fill of teaching, I easily found a job in tourism, and later as a writer for an English-language magazine based in Rome.

Quite simply, imagining an Italy where English is prevalent is to imagine a country where I’d have little place or purpose — skill-less, maybe; jobless, almost certainly. Beyond the advantages, I strangely like that Italians almost always speak just Italian. Maybe for me it symbolizes a country that has resisted outside influences, that remains unapologetically itself, that has succeeded in preserving its language and identity.

Realistically, I know this probably won’t last. With English high schools springing up across the nation and Masters programs being taught solely in English at La Sapienza University, Italians may yet master my language. I wish them a prosperous journey. But, selfishly, for my sake only, may it be a slow one.