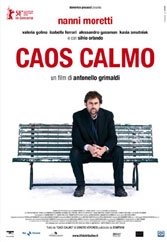 Antonio Luigi Grimaldi’s “Caos Calmo” has the pace of a Disney PG production with melancholy and brooding added. At the beach, middle-aged Pietro (Nanni Moretti) and his brother take to the surf to rescue two drowning women. But when good samiritan Pietro gets home, his wife is dead and his daughter Claudia wants to know where he was when it mattered.

The loss turns Pietro despondent. He can’t focus at work (he’s an investment banker) so he plops himself on park bench outside Claudia’s elementary school. Apparently Grimaldi wants to show Pietro’s sudden awareness of the little things around him. From the bench he sees a mentally challenged child and a pretty girl who walks her dog. Bank colleagues drop by and gab unconvincingly about a “fusione,” or merger. Pietro is even offered a promotion — interesting since he’s been a no-show at work for months.

Pietro starts compiling Moretti-like mental lists. “What are the airline companies I have flown with in my life?”, “What are the street addresses of all the places I have lived?” The problem is that we don’t know enough about Pietro’s life to care.

Narrative shortfalls are frequent and non-sequiturs don’t help. Back at the beach, Pietro meets Eleonora (Isabella Ferrari), one of the women he rescued at the start. Never mind that they hardly know each other, time now for an explicit, four-minute-long, well-lit sexual encounter in which Pietro greedily sucks on Eleonora’s breasts.

At the end of the movie, daughter Claudia says something like, “Dad, you are weirding me out with this sitting under my school window for a year. Could you go back to work, please?” He pats her head and agrees to find something else to do. Great.

If Grimaldi is out to make a feel-good movie, he misses the mark. Roman Polanski gets a cameo as Pietro’s boss who (you guessed it) visits Pietro at his park bench. Moretti wrote the script from a Sandro Veronesi novel.