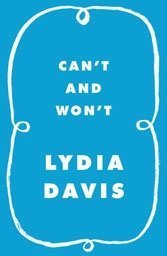 The narrator of Lydia Davis’ “Two Characters in a Paragraph” is at odds with the capricious he-she characters in her own two-paragraph story. “He seems to have drifted from where I put him and is hovering over her, only one paragraph away (in the first paragraph).” As is Davis’ way, the potentially banal — the paragraph — acquires its own special topography: “…It’s a dense paragraph, and they’re in the very middle of it, and it’s dark in there.”

Davis’ latest collection (100-plus pieces) is a grand salon of dream recitations, mini-stories, ruminative rants, extracts from Flaubert’s letters and all manner of burning snippets that show off her gift for meticulous whimsy, deadpan epiphany, and dull mischief, all which — taken at face value — might seem incompatible, if not paradoxical. Not for Davis. A chameleon, she’s as capable of playing a housewife disenchanted with her Bolivian maids (“The Dreadful Mucamas”) — “We suffer from their rude and ruthless vengeance” — as she is a harrowed teacher lacking in self-esteem (“None of my students came to see me, not once…”) ironically thanking a grant committee years after her grant expired (“The Letter to the Foundation”).

Davis invents or crawls into negative spaces, speaking for subatomic absence, and writes sadly, sweetly, churlishly from this idiosyncratic but perfectly groomed abyss. She’s the writer capable of watching cows for days and inventing a life landscape from their grazing (“The Cows”), of poking fun at spam by responding to it with unimpeachable earnestness (“You have made a basic factual mistake and addressed your letter not, to Lydia Davis, which is my name, but to Lydia Danj…”), of writing to various kinds of manufacturers with Thurber-like innocence (“You are falsely representing your peas as less attractive than they actually are.”)

She’s often in bus stations or on trains, staring, wondering, speculating, and inventing rigorous little fictions that seem to stop in their own tracks, which is the birth of wonder. “Housekeeping Observations” is this line: “Under all this dirt/the floor is really very clean.” Obvious perhaps, until this and other slivers of suddenness leave you murmuring to yourself about the kind of mind who can see not only under dirt, but also very probably under the floor itself. “What a strange thing it is — the human brain,” says the narrator of “The Coachman and the Worm,” one of a dozen tiny manipulations of Flaubert’s letters. What a strange thing it is, Lydia Davis’ brain — and a wondrous thing.