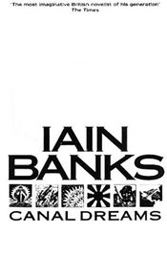 Banks’ terrestrial fiction attracts because you sense he’d really just put his characters on a moon of Uranus (and does under Iain M. Banks, science fiction raconteur). Here, he creates an enterprising accidental tourist, famed Japanese cellist Hisako Onada, who because she hates flying heads to Rotterdam on an oil tanker navigating the Panama Canal.

But the canal turns violent, marred by revolutionaries and U.S. forces (it’s the 1980s, remember). The vessel is seized and Onada’s 18th-century cello is destroyed. She’s also raped. Onada isn’t the get-mad type, but she certainly knows how to get even — and her avenging angel spree gives the novel, and Onada, outrageous comic book flair. Silly but clever.