Can You Ever Forgive Me? 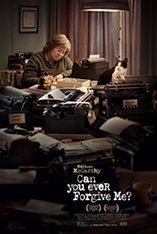 Actress Melissa McCarthy has never been one to shy away from playing unlikable characters. Her film breakout, in Paul Feig’s “Bridesmaids” (2001) — as amusingly unfiltered Megan —defined her career from that point on. Over two decades, McCarthy has been a staple of broad, slapstick comedies.

But Marielle Heller’s excellent “Can You Ever Forgive Me?” is an altogether different kind of beast, allowing McCarthy space to move from brashness to pathos in often hilarious but always moving ways.

The film is a character study of American writer (and forger) Lee Israel (1939-2014), a middle-aged author doing all she can to keep her head above water in unforgiving New York City.

“Can You Ever Forgive Me?” — based on Israel’s 2008 autobiography of the same name —is essentially a retelling of Israel’s career of high-level scamming — she used her talent as a biographer to forge and sell letters under the names of literary icons, including Noel Coward.

The Israel we meet is hardly likable. She refuses to compromise her artistic integrity for a shot at mainstream success. She shies away from any publicity and treats her publisher as an enemy. At first glance, this is the familiar McCarthy, a sour and off-putting character. But the screenplay and McCarthy’s performance are precise in holding off the stereotype. You soon understand why Lee has cultivated this tough exterior. She’s the wrong age, the wrong gender, and has the wrong sexual orientation and the wrong personality type to fit into the world she inhabits, so she distances herself from her surroundings. You wouldn’t necessarily want to spend time with Lee, but you feel a part of her inside you.

Israel’s partner in crime, the charming alcoholic Jack Hock (Richard E. Grant) briefly softens bleakness with a seemingly comedic twist. But it’s comedy that wears trauma on his sleeve. Both hurt, Jack and Lee shield each other from loneliness.

Ultimately, “Can You Ever Forgive Me?” is shockingly life-affirming. What could have been a film about regret, instead deals with the basic impulses that keep us marching on. Before being sentenced Israel tells the judge, “In many ways, this has been the best time of my life.” The risk of creating forbidden art was, to her, worth the repercussions. For once she felt alive.