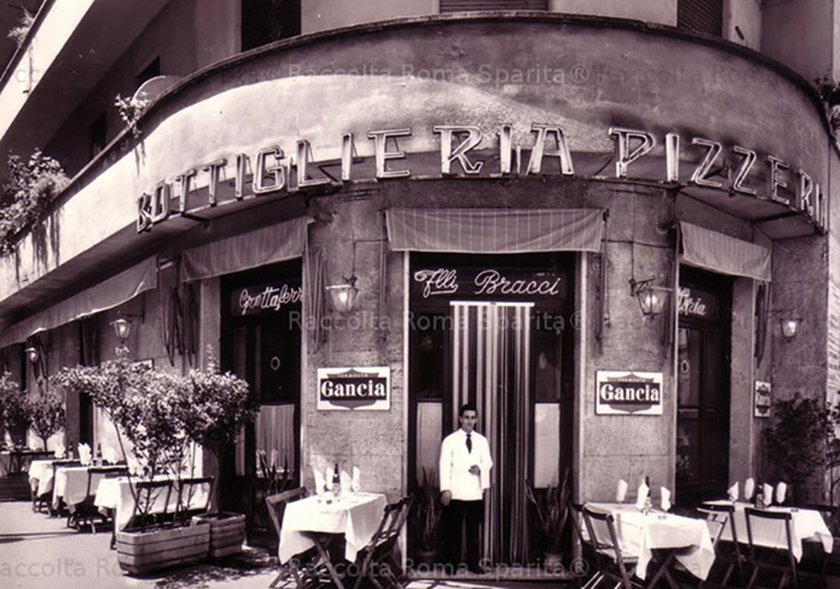 The past is rich, the future uncertain...
S

ome of Rome’s shuttered restaurants are not only closed but dying inside, leaving some owners both crushed and angry that contagion has threatened this millennium-old city institution, the trattoria and its offshoots, to the brink of capitulation. I know a number of restaurant owners, and three plaintively asked me to act as their voice, which I try to do.

Not that they expect redemption or even solace, never mind redress. They don’t. They think the dye is cast, and that a virus, turned into hysteria, has been allowed to disfigure their trade, never mentioning that dining out in Rome existed in times far worse than these, when malaria, smallpox, and syphilis existed all at once.

For these proprietors, a restaurant is a living entity that celebrates human interaction, and to refer to a restaurant only as a business shortchanges both its culinary and cultural role in the life of a city.

Restaurants are where people gather, argue, rejoice, joust, flirt, all of it in theatrically necessary close quarters. And close quarters seem to have fallen afoul of medical science and its governmental executors, at least for the foreseeable future, or so the owners I spoke to think.

Owners respond to redrawing seating numbers and table arrangements with the line, “Isn’t that cutting off your nose to spite your face?” Isn’t medically segregating restaurants based on social distancing a supreme paradox since the collective rites of dining out in a crowded and animated way is such a culturally entrenched way of enjoying life in the city? And isn’t such a paradox an affront to the collective side of culture?

One owner, who has co-run his place near the Vatican for 45 years, spoke of more people being “sick with hysteria than infected with the coronavirus. You can’t go out to eat if you are scared. You can’t eat with a mask on. You can’t be in a room if someone’s sneeze makes you crazy. It just can’t be that way, but it is if the situation plays out like lockdowns, and discussing it rationally just makes you crazy or forces you to start sobbing” because making sense of fear is impossible, just as impossible as enforcing rules of behavior when people are in public. “Before [the Italian lockdown], people escaped to dine out, away from everything,” he added, “but now they have their cellphones, so they’re basically on high alert all the time.” This anxiety, he said, may take years to manage, “and by then a lot of us will no longer be around” because minimal cash flow, in addition to crowd restrictions, will force many places to close. “I always thought this would happen if we had another war, not that we’d actually do it to ourselves. To ourselves!”

Isn’t medically segregating restaurants based on social distancing a supreme and ruinous paradox?

His 37-year-old son, who has bone marrow cancer, was recently told treatment labeled urgent in January would have to be postponed indefinitely because of virus restrictions and the closure of some specialized medical facilities.

How can a disease that data proves claims mostly those over 60, if not over 80, be permitted such sea-parting status at the expense of those who might have a full life ahead of them, this owner asks? How? He is now nearly in tears. How is it that Italians are not mindful of the plagues that came before, when there were no hospitals, especially for the poor, “and you simply made do, and life went on as best it could, and that by itself gave people hope.” How could those in power fail to foresee that lockdowns intended to “save all” could, and would, undo some traditions beyond repair? “Did anyone do the moral math?”

He has no reply to any of his questions, nor does he believe that state aid will help small business owners. “They talk. That’s all they do.”

Another owner, who opened his eatery in 1999, was thriving and had planned to retire at the end of 2020, turning management over to his two sons and daughter. He’s now 77, has diabetes and angina, but has had no access to his physician since early March. All his waiters and waitresses are on unemployment. He cannot pay the substantial rent without emptying his reserves. His best pizza chef, an Egyptian, contracted the virus and recovered in three weeks. “He is in better health than I am,” he tells me.

A plumbing leak or kitchen fire can shut a place for a week, even a month, “but two months? Two months that will almost surely become four, perhaps more, what then?”

What, this owner asks, is a restaurant, or a coffee bar, if not a place to bridge such distance? Siamo sempre essere umani… we are still human beings.

The husband-wife couple that own a place not far from where I live on the eastern outskirts of the city express quiet despair. Part of it is financial, another part a refusal to accept the world is doing this to itself, “like jumping off a bridge with a smile, like a lunatic,” says the husband.

His wife says, “They say they are doing this for us, the elderly [she is 77]. I remember polio and that [took] children and young people. I was young. My parents worried. I remember this well. But to close the future for those who must live it on behalf of those who have already lived a lifetime, no! And I am a Christian. I believe in life. But I also see right and wrong, and this is wrong, though those who are insisting on it cannot see that now. They are too blinded by the act of their project, their plan. They can’t or won’t see the consequences.”

Her husband is harder. He spent a lifetime trying to keep up with government taxes and codes and paperwork, and now he is served a death sentence, and never even placed on trial. “Not once were we consulted on anything. Since we were not doctors we were irrelevant, outsiders, cogs in the machine.” Soon, Rome will awaken to a broken machine, he says.

“To close the future for those who must live it on behalf of those who have already lived a lifetime, no!

The Italian government has already said than more than 20 percent of family-owned business will not survive this crisis, but said so in a way that sounds like an acceptable loss.

“So,” says the husband, “that means the death of 25,000 people means you fold up your world and go home. After the war, the response to 10,000 times that many losses was, ‘Okay, let’s start again. Let’s make life worth living again.'”

All three owners are convinced new social distancing rules in restaurants and other facets of life will do no more than reinforce existing phobias and create anti-restaurants, where people are made aware, through distance and barriers, that there’s something to fear, to worry about.

The owner of the restaurant founded in 1999 says he has been insulted for speaking his views, as if he favored death ­camps.

“That is what hysterical behavior is, an instant closing of the mind to anything that isn’t the party line, or what you’re told you should be doing. In this sense our great medical people, who have helped the sick, have done us a terrible disservice because they do not understand how social life works and its removal from science. They don’t get that most of life is lived science-free, through impulse and intuition. The same way you suddenly change you mind at a restaurant and decide to order something completely different than what you thought you were going to get. No science plays a role.”

The irony, he says, is that fear of sickness and death is turned into an instrument that restricts pleasures and emphasizes worry. “To my mind, there is no going back from this. People have been shouted at on social [media] and by TV news for too many weeks. They’re brainwashed, and, understandably, are terrified of all around them.”

He says restaurants and bars will of course reopen in time, but that the relaxed attitude that characterized Rome’s “off duty” life will struggle mightily to again find its footing.

“For a long time after the World War II, Europe was poor and many people certain a third one was coming.” It took a decade, he says, before various economic and social breakthroughs began, “like crocus buds, slowly.”

Things are different now. Take-out, which Rome has resisted for decades, has made its move during the lockdown. The move won’t be temporary, he believes. “I’m nearly 80. I had my run. I have my memories. But if you want to tell me how dying of coronavirus not being able to breathe is an awful way to go, let me tell how being abandoned and more or less left to die is just as bad. So no one wins.”

— Translated and abridged by Karim Holmes. The translator omitted a lengthy introductory section in which author Polli explained the owners she interviewed requested strict anonymity to preserve the reputation of their businesses.