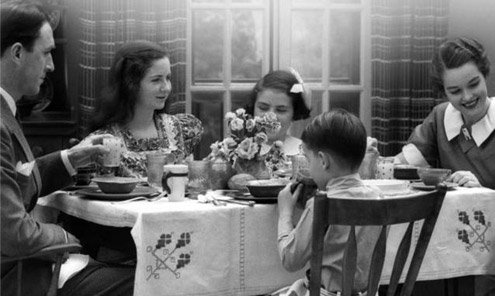 Food, writes Michael Pollan, "is about pleasure, about community, about family and spirituality..."
F

all is officially here. In Italy, this brings the cambio di stagione, a national and seasonal ritual in which the previous season’s clothes are moved to the closet high bar while those for the months ahead are pushed down to the more accessible lower one. Anyone can benefit from such a twice-annual exercise, a useful if sometimes painful taking stock of every item in their closet. Who wants to wrangle clothes that no longer fit or work?

But Americans could benefit in particular. Pinterest and decorator-porn magazines feature American closets big enough to house an Italian family of five. Though American women apparently have — or dream of having — more in their closets than Italian women, they tend to achieve noticeably inferior results.

This isn’t just some curmudgeonly personal observation. My American visitors notice that the average Italian woman manages to be more elegant with far less.

Foreign visitors to Italy often comment on a similar effect with Italian food. Even a modest trattoria offers better fare than many American restaurants that have far greater pretensions.

The comparison between Italian eating and dressing is instructive. So instructive that perhaps the best advice on how to dress well — and like an Italian — is in a book about food: Michael Pollan’s “In Defense of Food: An Eater’s Manifesto.”

In it he says: “Eat more like the French. Or the Italians. Or the Japanese.” But “eat” could easily be replaced with “dress. “All three cultures have sartorial traditions that reflect what Pollan finds most important about eating. “Food,” Pollan writes, “is about pleasure, about community, about family and spirituality, about our relationship to the natural world and about expressing our identity.” So are clothes.

Pollan cites 18th-century French gastronomist Jean Anthelme Brillat-Savarin, who distinguished between “feeding” — what animals do — and “dining” — what civilized people do. The former is a need; the latter is a need that human culture elevated into an art.

Americans clothe themselves. Their clothing priorities are strictly utilitarian: protection against the elements, low cost, easy care and comfort. Italians take clothing and apply priorities that extend beyond utility to include beauty, taste and workmanship. They dress.

Here are some more specific applications of Pollan’s manifesto.

1. “Don’t eat anything your great grandmother wouldn’t recognize as food.” The same goes for clothes, especially if you’re older than 15. Take leggings, for example. In grandmother’s day, only circus performers wore them. Pushing leggings outside the circus ring has done nothing good either for leggings or most of those who wear them.

2. “Stay out of the middle of the supermarket; shop on the perimeter of the store.” Or avoid supermarkets altogether if possible. Buy fresh, not processed foods, writes Pollan.

For clothes, that means avoiding box stores and trying to purchase small brands – maybe even local ones. This isn’t easy (90 percent of U.S. clothes are made abroad, according to Consumer Reports), and probably expensive (but see rules 3 and 4). But cheap clothes, like cheap food, produce labor and environmental abuse. Even Italian chain stores, such as Zara and H&M (neither is Italian-owned) are smaller than U.S. and located in city centers.

In general, well-dressed Italians are faithful to small, local stores where salespeople know them and often behave more like curators, purging and coordinating the whole wardrobe.

3. “Always leave the table a little hungry,” writes Pollan. “Many cultures have rules that you stop eating before you are full…”

Pollan means moderation. Italians are moderate in style and quantity. They tone down fashion excesses (think Milan ready-to-wear vs. French haute couture), and they buy less. See corollary in Rule 4.

4. “Pay more, eat less.” Have fewer clothes, but better ones.

6. “Eat meals and don’t eat alone.” Dressing, like eating, is not just a physiological need but also a social one. Shopping in Italy — like eating — is a social event. Italians take un giro dei negozi, a tour of the shops with friends or family. They stroll, look, have a cappuccino. They don’t necessarily buy. Their companions keep them from making stupid purchases. They say what looks nice. They impose restraint.

They also don’t see “dressing” as a solitary activity. Clothing made for private settings, such as the gym or living room sofa — sweat pants, yoga gear, pajama pants, flip-flops — should stay there.

I could add other considerations, including color and season. Enjoy color and use it, as you would in a good meal. Wear clothes appropriate to your own season — your age — just as you consume food. Keep in mind that some foods are better fresh, while others improve with age.

Finally, Pollan admonishes, “Don’t buy food where you buy your gasoline.” So don’t buy clothes where they sell gasoline, or groceries and guns. No Italian would.