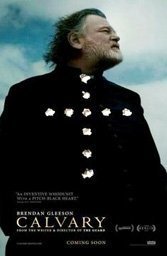 English director John Michael McDonough’s film is a high stakes moral thriller — not about the mob or terrorism but about the Roman Catholic Church in Ireland. The film follows seven days in the small town life of a husky priest named Father James (Brendan Gleeson) following a death threat he receives during confession. The seething confessor says he was abused as a boy. “You know what, Father, I am going to kill you, in seven days.” Why Father James? “Because you’re a good priest, and no one will believe it when a good priest is killed.”

Father James likely knows who’s threatened him, but he refuses to change his routine, continuing to check in with parishioners, listening to the depraved ramblings of adulterers, callous non-believers, and abused women — all the while suffering the spineless greed of a fellow priest. But Father James also knows real world life. He’s a widower who took the vows after the death of his wife. He has a daughter, Fiona (Kelly Reilly), who lives in London and has personal woes of her own. She recently attempted suicide. Her visit to the town will only complicate his crisis.

McDonough’s film, with generous Father James (the ever-steady Gleeson) at its center, is about both Catholic hypocrisy and the existence of deeply decent priests who push forward despite their doubts and fears. Father James believes in the power of love and forgiveness. Though his life is in imminent danger, it is salvation he knows, trusts and ultimately refuses to forsake.