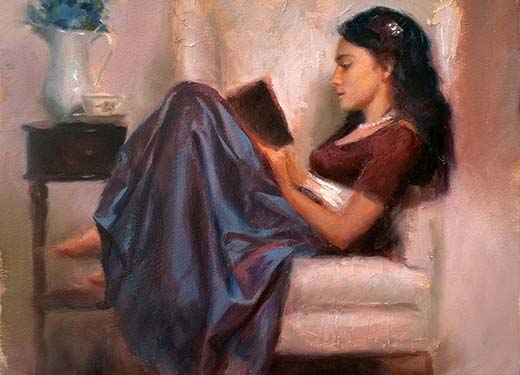 The youthful pleasure of reading…
I

My childhood home was on the western edge of Canoga Park, a neighborhood in the northwest, far from the glamour that most people associate with LA. I grew up on a tree-lined street of single family homes built in the 1960s. We lived surrounded by malls – there were three within a fifteen-minute drive, and two of them had movie theaters.

But my favorite place, when I was a child was the Canoga Park Library. In the summers, my mom would take me to the library, where we would leaf through dozens of books. A friendly librarian aided us in this quest. Since my mom didn’t grow up in the United Stats, the librarian was helpful in pointing out which books were good for my grade level. I remember stocking up on Beverly Cleary, Laura Ingalls Wilder, and later on Judy Blume. I reveled in the freedom of summer reading, when I could move at my own pace, in my own time. My imagination thrived with stories of other lives and places. Sometimes, instead of sleeping, I snuck my book and a flashlight under the covers, and read far into the night.

My mom’s parents also lived in LA, but they didn’t live in the Valley. They lived nearly twenty-five miles away, on the Westside, near Beverly Hills. Besides the library, my grandparents’ house was quite the best place in in the city. Everything was different there. They had magnolias growing in their neighborhood, and the sidewalk outside was covered with the large, waxy leaves. In the evening, the air smelled like jasmine. My grandmother’s kitchen was a mysterious place of warmth and spices. And the language spoken at my grandparents’ home, Farsi with a sprinkling of English, was also at times a mystery to me. I could understand some things, but not everything. It was easy to grasp the names of foods and the expressions of emotion, but not to interpret a heated discussion of current events.

Usually we went to my grandparents’ home on Friday nights. The whole family, including my mother’s three siblings, their spouses, and their children, would gather there for Shabbat dinner. I was their first grandchild, and the others were years younger than me. It was my job to watch over them as we played – a job I took seriously.

I reveled in the freedom of summer reading, when I could move at my own pace, in my own time. My imagination thrived with stories of other lives and places.

My memories of my grandparents’ home extend throughout my high school years. The summer after my last year of high school, I took a college course at UCLA, not far from where they lived. I remember visiting them after my intensive Italian language class. Over cups of Persian tea, I practiced speaking with my grandmother. Though her formal education stopped at age fifteen, she had a talent for languages, and she could speak some Italian. My grandmother confessed that she’d never had a cappuccino. Together, in a funny combination of Italian, English, and Farsi we debated the merits of coffee versus tea.

And then a strange thing happened: I moved over one hundred miles south to San Diego to attend college, and two years later my grandparents moved to San Diego as well. For our family, Los Angeles extended all the way to San Diego, where my mom’s sister and family had moved a few years earlier. I attended UCLA over the summer, and UCSD in the fall.

My college was in La Jolla, near the Pacific Ocean. I could literally see the ocean from my dormitory. Getting there, however, was not so easy, but when I did the sound of the waves soothed me. I walked on the sand and poured out my heart to the universe. I told it when I got my first D ever (in a chemistry class freshman year) and decided to change my major as a result. And after I found out my parents were separating during my sophomore year.

A year after my grandparents moved to San Diego, my grandfather died. In many ways this was the most difficult change of all. The water and the sand were good listeners. Sometimes, I didn’t even have to speak. I would just go there and feel better.

Living in Los Angeles now, as an adult in the 21st century, is a different experience altogether. Both my grandparents, as well as my mother, passed away years ago. My father and sister don’t live here anymore. Only one of my mother’s siblings, my uncle, and his wife, remain in the area. Almost all of my cousins are grown-ups with jobs, though the youngest two are seniors in college now. Some of my cousins have their own children. I almost never go the Valley anymore. I’ve left LA a couple of times, and may leave it again someday. But for me, this will always be home.