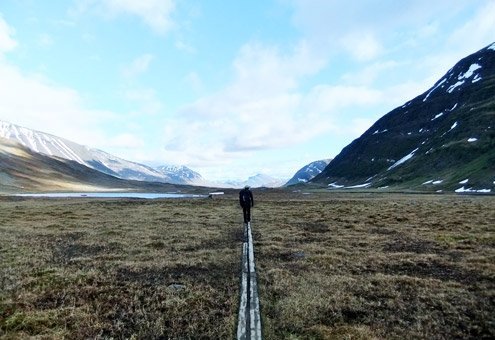 On bad stretches, the planks disappeared and I negotiated ankle-deep mires. Photos by Julianne VanWagenen
S

ome years ago — never mind how long precisely — having little or no money in my purse, and nothing particular to interest me on shore, I thought I would sail about a little and see the watery part of the world. It is a way I have of driving off the spleen, and regulating the circulation.

After an 18-hour train ride I was there, in Abisko, home of the Aurora Sky Station. Above me was a billboard promoting the aurora borealis. Not this trip, I thought. It was six days before the summer solstice and the sun wouldn’t set until I returned to Stockholm.

I tightened my pack straps, hopped in place to settle it, and looked around for a trail sign, possibly one that was wood carved and arrow-shaped. And there it was: This way to the Kungsleden. In all, the hiking trail between Abisko and southern points runs more than 400 kilometers.

I looked at the closed train station and behind it the vast, vacant lake, and the set off on the southbound dirt road.

Why is it, I wondered, that we make these trips? Why go into the wild? Is it a test of resolve?

On the first day, misery outstripped majesty. My body ached from the train ride and the forest wriggled with newly hatched inchworms. They fell from the trees into my hair and made the ground slippery with a layer of bright green worm-gut. Blankets of mosquitoes welcomed me when I finally reached camp at a mountain station of the Kungsleden National Park. Trapped in my tent, I put on my eye mask to block the midday-bright sun, listened to “Moby Dick,” and tried to sleep.

I awoke at frigid 6 a.m. and the mosquitoes were gone. The station’s only attendant had just put logs on in the sauna. Take a dip after the sauna, he said. It’s good for the heart.

But later I did dip in — into a lake of unblemished glass until it gave way to my ripples. I dove, letting the cold hit me all at once.

Ten hours later, still chilled to the bone, came a torrential downpour. There was nowhere to take cover, nowhere to eat lunch, and 25 kilometers divided me from my next campground. So I walked in the rain and peered at the changing terrain. Mountains rose and a river valley formed. They would lead me to Kebnekaise, the tallest peak in Sweden.

On good stretches, planks covered bogs and I walked the straight and narrow. On bad stretches, the planks disappeared and I negotiated ankle-deep mires, knee-deep arctic rivulets, and rock fields seemingly eager to break human bones.

The rain lifted just before I arrived at the next mountain station, on a bluff at a wide and violent point of the river. I crossed a suspension footbridge to get there. The mountain attendant gave me warm blueberry soup and told me to get to the sauna before she had to turn it off for the evening.

A tall Swedish girl was already there, sweating and inspecting the blisters that her father’s old leather boots had rubbed into her feet. “Plunge?” she asked me, and walked out into the alien quiet. She was naked. It was late and all the trekkers asleep, but I felt conspicuous in the bright daylight. We ran down 100 wooden steps to the river and she leapt out into its whirls.

The next days she and I walked together. The mosquitoes and clouds were gone, as were the other trekkers. We were deep into the Kungsleden now, far from entries or exits. Not many walk that stretch in the cold arctic spring. Our days were measured in counting planks and peaks, those that came before us at breakfast and those behind us when we finally pitched camp.

By day we were wind-whipped and frostbitten. At night we were chilled, even in our sleeping bags. The warmth of the midnight sun relieved us. Our only witnesses were grazing reindeer. At each new station, we’d dive into a river.

Aches and challenges, and once again I wondered why. Why step into the wind? Why walk when you’re tired? Why take to the road?

I don’t have an answer.

“It is a way I have of driving off the spleen,” says Ishmael. And I keep listening.

“Whenever it is a damp, drizzly November in my soul, I account it high time to get to sea as soon as I can.”

For Ishmael, a sea; for me, a trail and its mountains.