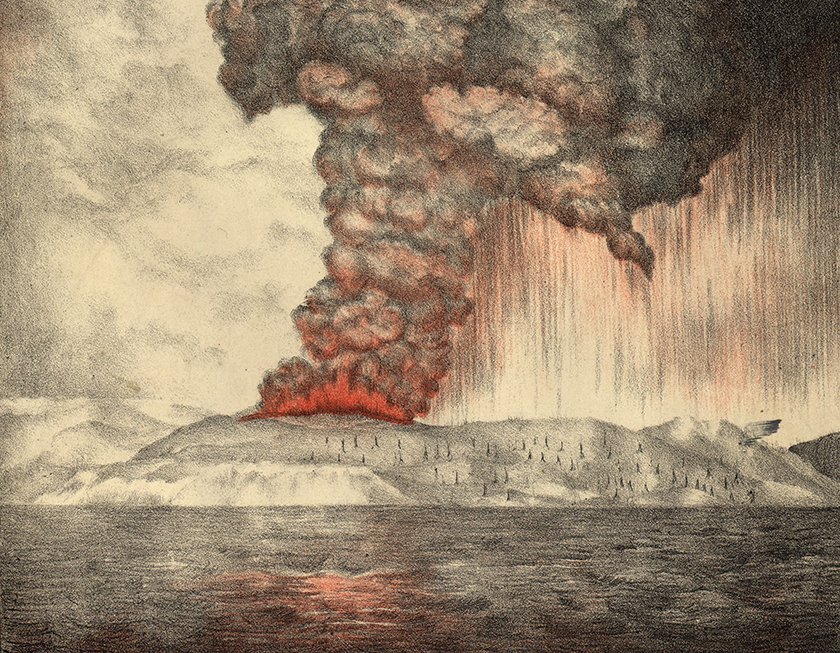 The massive 1883 eruption of the Krakatoa volcano destroyed an island off Indonesia and was allegedly felt continents away and brought out the Cassandra streak in Western painters.
I

recently participated in a panel discussion held in Stockholm that purported to address two only vaguely related subjects, historical revisionism and climate change.

My modest intellect chafed each time I tried to imagine the two in the same laundry hamper. The whole thing would have been a useless bore and a waste of an afternoon, with men and women explaining the perils of COVID alongside the even greater peril of an overheated earth — not to mention the need to tear down statues and rename squares that honored those who backed colonial enterprises — had it not been for a very vocal member of the audience who politely waited until a panelist had finished a presentation before launching into a rebuttal.

He called himself Henrik and seemed about forty. The only salient point he gave away about his past was that he’d been in the navy, the Swedish navy presumably, though that’s not exactly the Spanish Armanda.

Henrik had no argument with climate change per se, but pointed out that it was the latest commercial vehicle for governments and mass media to bring in cash. He correctly noted that alongside climate change, British papers were laden with ads for whisky brands, cars, designer clothing, and so on, their online sections shifting between warnings of death and destruction ahead of cheery popups about discount prices.

The observation was wry and to the point — capitalism loves bad news — but he was often cut off by the moderator. At one point he ignored the warnings and plowed right ahead with his theory that the developed world had become what he called a Cassandra Culture. It depended on intimations of the apocalypse for attention and applause. It was a “be afraid, be very afraid” culture that lacked the emotional intelligence to recognize the damage caused by insisting on doom and gloom over a period of years. It was too distracted by its greed.

He correctly noted that alongside climate change, British papers were laden with ads for whisky brands, cars, designer clothing, and so on.

As for the call for action to slow climate change, it seemed to him more like a marketing exercise similar to the kind the United States put together after the Sept. 11, 2001 terrorist attacks, which depicted a world in immediate peril and backhandedly suggested our Arab community members were members of sleeper cells. He reminded the panel that in the years after 9/11, world-shattering terrorist attacks were predicted weekly, if not daily, and though there were in fact several big-city bombings and shootings in Europe, none of what happened aligned with the dire predictions.

It was when he linked the COVID scare to climate change anxiety that both panelist and moderators shut him down. That, they all knew, was far too tricky terrain to leave to a casual bystander with a big mouth.

All he managed was to shout, “COVID, climate change, all part of Cassandra Culture. You make yourselves and others believe the end is near when…”

This was too bad since I wished he’d actually been on the panel to shake things up. Everyone else mouthed the same party line about the virus and climate issues. Many clearly couldn’t wait to leave to get a shot of Vodka and forget about it all.

Even I got myself in trouble with what I thought was a fairly benign observation. As the panel turned to the deep partisan divide in the U.S. and that country’s good fortune in having evicted the likes of Donald Trump, I grew restless as a Norwegian professor suggested the U.S. tear down all statues of Confederate heroes, and that the production and sale of the Confederate flag be banned. This is nothing new. I’ve heard it in America. Since I’ve always believed history needs airing out, and context — which includes preserving statues of people now regarded as monsters — I was surprised at the Norwegian’s vehemence.

His comments were supported by a Swedish social scientist who pointed out that all statues of Stalin had been torn down after the fall of the Berlin Wall, at least those in Eastern European satellite countries. What she didn’t say was that those statues mostly didn’t come down by decree but by mob action, sanctioned by no one in the chaotic times between late 1989 and 1991, when the Soviet Union was officially interred. The social scientist claimed that children should not be forced to walk through parks in which statues of men who had lorded over colonial undertakings were celebrated. Even Churchill should go, so it was clear to all that the world now had zero tolerance for the dark side of its history.

I chipped in as quietly as possible. I did so because she called these revisions an enlightened act. I chose to point out the first great erasing trend came after the Roman emperor Constantine converted to Christianity. And then came the popes. These popes, of course, sought to honor their own faith. What better way to do so than to build great marble churches?

Ever wonder why the Colosseum in Rome is so nude? Or why the Roman Forum doesn’t contain a single fully intact Roman structure. The reason is that the popes, seeking to cancel the heathen Roman Era legacy, pushed semi-slaves (yes) to dismantle those Roman glories, moving the marble into heaps to be used in the making of Rome’s thousands of early churches. It was a very practical kind of cancellation but exceedingly effective. The only monument to remain intact, its marble still present, is, of course, the Arch of Constantine, since he played with the good guys.

The popes were early bosses, even mobsters, but their crimes occurred too long ago for anyone to begin tearing down churches.

So when this panelist suggested this was new and modern and enlightened, I shook my head, and offered my explanation.

The analogy couldn’t be compared to colonialism, slavery, and so on. All the Church did was to play the role of the winners in a war: they took the spoils.

But was it not clear that by diminishing the effect of these astoundingly built Roman temples and replacing them with the likes of St. Peter’s Basilica they were openly attempting to eliminate the legacy of a people who didn’t believe in the Christian God?

This is when the microphone was taken from me and given to a historian from Italy who insisted the popes had acted only opportunistically and had no special interest in flattening the Caligula legacy.

The popes and their top bishops were astute politicians. They knew precisely what they were doing. They lorded over a starving underclass for centuries, knowing they had nothing to fear since the starving feared God more. They were more concerned with the fruits of life in heaven than life on earth. The popes were early bosses, even mobsters, but their crimes occurred too long ago for anyone to begin tearing down churches.

I’m not a dogmatist. I’ve always liked a good, informed debate, but on that day in Stockholm I’m sad to say the person who made the most sense was the guy who got tossed, and the guy who wanted to introduce another point of view (call it context) got his mic yanked.