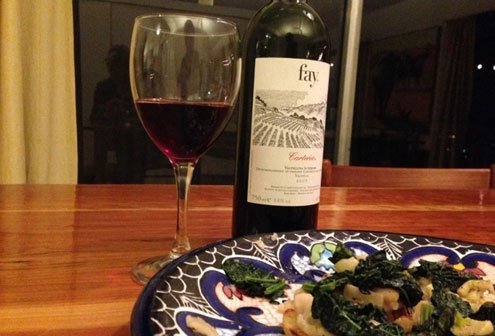 hough Italy is a long way from Southern California, it got a lot closer when I started opening bottles at a recent tasting dinner for a group of Americans at the home of friends Bo and Julie Manson in Ojai, east of Santa Barbara.

The Conciliis family winery is just south of Naples in Campania, located about the same distance from the Mediterranean, 20 minutes, as we were from the Pacific.

The wine, made entirely from the native Fiano grape variety, evoked that juxtaposition, the dry minerality of the mountains with a hint of saltiness from the sea. For me, it also conjured up images of nearby Paestum, the ancient city founded by the colonizing Greeks some 2,700 years ago and later taken over by the Romans. It boasts three remarkably well-preserved Greek temples dedicated to the goddesses Hera and Athena.

The original Greek name of the town, Poseidonia, honored the Greek god of the sea, but it was the land’s remarkable fertility that made it precious. Surrounded by the Parco Nazionale del Cilento, the Conciliis family all-organic vineyards have the same rich soil. Their Donnaluna (Woman of the Moon) has a light and feminine floral aroma as if to honor the goddesses.

The second course, bruschetta with fava bean purée topped with sautéed greens, is typically a southern dish (Puglia). But I chose to pair it with Sandro Fay Valtellina Superiore Valgella “Carteria” DOCG 2007 (€30-35) from the steep south-facing hillside of the Valtellina in northern Lombardia, just south of St. Moritz.

The wine —100 percent Nebbiolo — comes from Sandro Fay’s Carteria vineyard at nearly 600 meters with rocky soil that drains quickly and holds the heat of the southern exposure. Instead of being robust and tannic like a Nebbiolo wine from sandy/clay soil of Piemonte, it is a light, but complex wine, that evokes fresh, sunny Alpine air, temperate breezes from Lago di Garda below, and crisp minerality from the soil.

The third course was tagliata: rich slices of steak that Bo cooked rare on the grill and arranged on a bed of arugula topped with thin slices of Parmesan cheese. The contorno, side dish, was oven-roasted baby carrots with garlic and olive oil. I opened two different bottles from the Veneto to compare and contrast: Giuseppe Quintarelli Rosso Ca’ del Merlo IGT 2000 and Romano dal Forno Valpolicella Superiore DOC 2004 both priced at €80-85.

Legendary winemaker Giuseppe Quintarelli, who died in 2012, was known for holding vintages in his cellar until he considered them “ready,” often years after government standards allowed their release. Featured in a list of Italy’s most expensive wines, a Quintarelli Amarone can sell for €400-€600. I recently saw it on a U.S. menu for $900.

This Quintarelli Rosso was made with indigenous yeasts from the same mix of grape varieties as his Amarone (55 percent Corvina and Corvinone, 30 percent Rondinella, 15 percent Cabernet Sauvignon, Nebbiolo, Croatina, Sangiovese. It is a ripasso meaning that it went through a second fermentation (pressed grapes for use in Amarone are added to the wine). Finally, it was aged in botti grandi, large barrels.

Romano Dal Forno, also on the expensive wines list, makes “modern” versions of Valpolicella and Amarone. His mix is similar to Quintarelli’s, but his vineyards are younger. He leaves the grapes to dry somewhat before fermentation, increasing sugar levels and adding weight and fruitiness. After fermentation, his wine ages in barriques, small oak barrels, to soften it and reduce tannins.

The Quintarelli was a light, vivacious ruby red color with layer upon layer of complex aromas and explosive flavors. The Romano dal Forno was almost black, with dense, rich, velvety fruity aromas and flavors.

For dessert, Julie served butter cookies and refreshing homemade sherbet made from handpicked Pixie tangerines. We discussed pairings and structure.

“What do you mean by wine structure?” the group wanted to know.

Structure, I explained, is the “weight” of the wine. The best metaphor is soup. Broth would be the least structured while hearty stew the most.

Alcohol levels are a good indication. In balanced wine, the higher the alcohol level, the greater its structure, and both a meal’s wine and food should progress on an ascending scale (fermentation tops out at 16 percent). A light Prosecco typically has 11 percent alcohol, the Donnaluna Fiano 13, the Sandro Fay Valtellina, 14, and the two Veneto reds, 15.

At the end of the evening, while sitting around the living room fireplace scheming our next virtual Italian wine tasting, someone said, “C’mon, Eleanor, you have to plan a real trip for us!” Ready when you are.