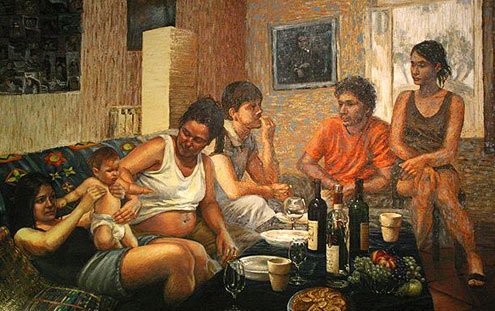 recently spent four days in Calabria with my roommate Domenico, visiting his family. Between mornings spent fishing for tiny and delicious surici (a kind of wrasse), exploring beautiful beaches, and checking out the Calabrian nightlife, food was our chosen past time. Domenico’s mother prepared most of it.

An excellent cook, she recently retired after 41 years of teaching. With more time on her hands, meals come first. When she found out three Americans were visiting for a long weekend, she pulled out all the stops.

We returned from a quick, first night swim to find dinner making its way to the table. We began with heaping plates of spaghetti with calamari in tomato sauce, which could have been a meal by itself.

Next came a mound of impossibly light fried calamari, a platter of breaded anchovies, trays of baked eggplant with tomato sauce and Parmesan cheese and an avocado salad. Homemade liquor — cedrino, an herb-based limoncello — appeared at the end. Good, strong stuff.

The next night Domenico’s father jumped into the fray. We began with spaghetti with ‘nduja. ‘Nduja is a spicy, spreadable Calabrian sausage that packs a punch. It’s made from pig remnants with lots of chili pepper added. Eaten alone on a slice of bread, it can make you weep. Just a slice or two can flavor a box of pasta.

La mamma was also involved. She made an amazing eggplant parmesan and a saltimbocca alla romana. Saltimbocca is a traditional Roman dish in which thinly cut veal is topped with a slice of a prosciutto and a sage leaf. The veal cutlets are wrapped and cooked with white wine. For a little Calabrian twist she lightly breaded each portion.

The third night was a little lighter. There were “only” three courses. We began with a pasta, maltagliati con vongole e ceci, literally “badly cut” pasta with clams and chickpeas. That came with costine di maiale, which best I can tell are ribs with bones removed. That was rounded out with another avocado salad (from the tree in their garden).

Our final meal was allegedly a light lunch to see us off before out six-hour train back to Rome. But light and meal do not seem to go together in Calabria.

Homemade strozzapreti pasta (literally “strangled priests,” since the clergy was seen as gluttonous) in a simple tomato sauce led things off. Then came lightly breaded meatballs, vrascioli in dialect, and an amazing zucchini Parmesan.

Of all the weekend dishes, the zucchini Parmesan most caught my eye. It was deeper than a typical eggplant parmesan, with probably five or six layers of zucchini slices alternating with tomato sauce, hard-boiled eggs, prosciutto and grated Parmesan.

Following my weekend of gastronomic indulgence, I had two interesting conversations that shed some light on the Italian, particularly southern, desire to feed guests as much as possible.

Dining at Rome’s Pierluigi restaurant with some friends, I recounted details of my Calabrian weekend to chef Antonio. The lavishing of guests with food, he explained, was the norm throughout the Italian south. After World War II, much of the country’s usually verdant cropland was decimated by battle and lack of upkeep. In some parts of the country, including the city of Matera in Basilicata (now a UNESCO World Heritage Site), people lived in ancient caves along with their livestock as late as 1960.

Keeping a family fed wasn’t easy. Older Italians, this hardship ingrained, imparted the importance of food and its sharing to their children, now in their 50s and 60s.

Domenico had his own story. His grandfather was a baker who died young. Every year the family paid respects at his grave. Often, visitors to the cemetery would pause in front of his grandfather’s grave and respectfully make the sign of the cross.

Eventually Domenico stopped one of the passersby and asked why. It turned out that his grandfather had flaunted government limits on bread rationing. The baker routinely gave more to families in need. No one forgot it.