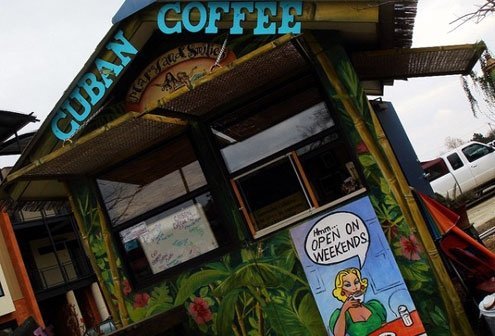 pend some time away from home and you begin to realize all the things you miss about a place. Differences begin standing out. You start to love and hate specific things about both your real home, Miami, and your home away from home, in my case Rome.

This hit me when I returned to Miami recently after a two year absence. As soon as I touched down in South Florida, a sense of the familiar hit me like a heat wave. I smelled Cuban pastries, recalled the taste of Cuban coffee, heard the sounds of Latin American music as it throbbed from cars.

I had missed my family, of course, but God is in the details, including convenience stores and supermarkets that never close.

Rome’s services are still trapped in a time warp. Even an ancient city is cosmopolitan. It suffers the hustle and bustle of daily life, though you wouldn’t know it based on Rome businesses. Between strikes and traffic jams, it’s easy to find yourself without groceries by the time most supermarkets close at 8 p.m. By then you’re stuck with a bar or a restaurant.

Looking for something open on Sunday in America? Everything. In Rome, it’s the opposite, with grocery stores still seeming to follow their own private schedules. I still can’t figure it out.

In the U.S., problem-solving is usually a phone call or one-stop away. It’s not perfect by far, but it works.

Convenience is an easy thing to forget.

I know what you’re thinking. Convenience comes at a cost. You’re right. In America, you’re treated as a number, even if in most cases with satisfaction guaranteed. But no one knows your name. There’s no special treatment. You’re just as important or unimportant as the next customer.

Rome does it the other way. Though things are becoming a bit more “global,” as some might put it, public relations and personal touches still go a long way here. They have tangible value.

Take my favorite Rome bar. As soon as I walk in, they know my name and exactly what I order daily. I don’t have to open my mouth. In Miami, I went to the same café everyday for a month, with the same lady serving me time and again. Recognition? Not a chance. Occasionally, my friends at the bar in Rome even treat me to breakfast.

These kinds of tradeoffs make you respect the strengths and weakness of each approach, though I’m still waiting for the day that my Cuban bakery in Miami tells me, “Mamasita, your caffésito is on me.“