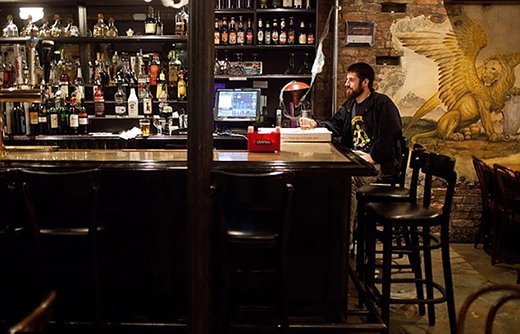 Losing your linguistic and cultural bearings happens often when you're new in town.
A

common lament among expats, outsiders and newcomers to Italy — as well as from some who have lived here for years — is how they feel lonely and miss the easy friendships they had back home. Part of this is a consequence of lacking linguistic fluency and a sense of common experiences and cultural references of native Italians.

I must confess I miss certain kinds of social interaction in the English-speaking world, particularly in the gay Anglo world.

A year ago, I stumbled on a gay men’s reading group based in New York City that uses a web chat line called “Meet Up.” I joined up all the while knowing I wouldn’t be able to meet the group members in person. Above all, I wanted to follow what they were reading. The web being what it is, I was soon in touch with a number of local “Meet Up” groups in Milan, some focused on the theme of English-Italian exchanges. I wasn’t terribly interested until I noticed a gay “Meet Up” group for English speakers who got together in local pubs and bars for Thursday evening Happy hours.

While Happy hour has become a popular way of socializing in Milan, often including elaborate cocktails and a full buffet for a very reasonable price, it carries with it the city’s stiff and formal way of doing things. Not to mention the events are populated mostly by straight people, either as a couple or attempting to couple. A simple, “Hey, let’s go for a beer,” with its casual cheerfulness, isn’t really part of the Italian social lexicon.

An Iranian-American state university teacher and a young Texan whose boyfriend is also a teacher jointly organize Milan’s gay “Meet Up” group. They try to pick a different bar every Thursday, giving preference to LGBT-friendly establishments.

The members are mostly from Anglophone counties, but also include a few from Greece and Cambodia, and, of course, Italy. Not surprisingly, some of them take advantage of the opportunity to practice their English.

After 17 years in Italy, I’ve had to accept that the language will never roll off my tongue or tickle my ears with the comfort and pleasure of my native English.

More than anything else, I miss good old English language banter — the jokes, and, of course, gay campiness.

More than anything else, I miss good old English language banter — the jokes, and, of course, gay campiness. Bring together a group of English-speaking gay men and just watch the linguistic acrobatics. Pertinent discussion topics proliferate, such as the appreciation of hairy or shaved bums. But not all is potty mouthed. One evening an Italian linguist and the British translator seated beside me passionately debated the correct use of the semicolon. I of course made some snide comment and laughed at them both.

Apart from language, members also share the common experience of being a gay sojourner and the group serves as an information network. For example, an American guy who shipped over his Mini from the U.S. was informed that neither his American driver’s license nor his insurance was valid in Italy. First, he’d need to get residency.

Since it’s a private group, you must request membership. One request came from an Australian man who’d never been to Italy and had no immediate plans to visit. He may be one of those people who join as many chat groups as possible, like Facebook friend “collectors,” or he may just be someone who for whatever reason feels isolated and sees joining a gay chat, even one as far away as Italy, as a way to communicate.

In the end, though, the point of the group is to facilitate face-to-face meetings and give people a chance to make friends, and maybe even find romance. As one group member from Argentina told me (complaining about how hard it was to find a boyfriend in Milan), “Of course I can always hook up with guys on Grindr but they have their tight little lives and they’re only interested in quick sex and nothing more.”

It’s a complaint I hear often, and it probably applies in all big cities. Yet it seems particularly appropriate in Milan, where many Italian men are “gay and out,” selective in their choices while carefully keeping their secret from family and workplace colleagues.

“I feel sorry for straight foreign guys,” a Scottish guy who works in the oil industry told me. “Unless they meet other guys through sports, it’s difficult for them to socialize. Gay guys can always find each other and no matter where you are you have an instant community.”

Though it’s only Wednesday, I’ve finished my teaching duties for the day and my husband is out for dinner with an old friend from school. I go to the Gay “Meet Up” site and type, Anyone up for a beer at Red?

A minute later a message appears, Can do. C U at 8.