By the book with Suzanne 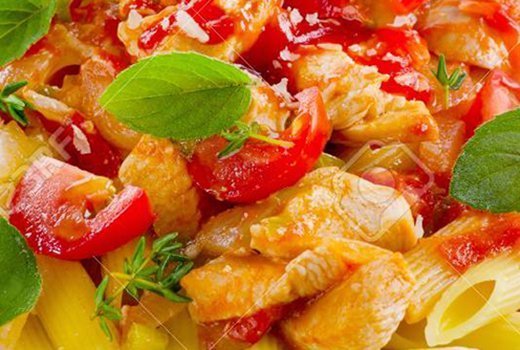 Chicken, Bolognese: Don't even think about it....
S

o here’s the thing. We cooks have a wealth of rules in the kitchen. The rules don’t budge, even as we encourage new cooks to loosen up, experiment, and embrace the unknown, while keeping it simple. In my cooking classes, I tried hard not to overwhelm my novices with complicated ingredients and preparation.

Yet my ingrained cooking-related opinions (which might help or hinder the potential cook) haven’t changed much over the years. Yet no matter how often I try to pare these rules and opinions to a manageable length, at least one of the commandments I’ve decided to set aside re-enters the picture, as if to say, “I’m not going anywhere.”

That said, here’s a sampling of my views, some of them no doubt likely to stir the pot, so to speak.

Green peppers are not in my recipes. Ever. Okay, maybe in gumbo, but even then, a red or yellow one is sweeter and doesn’t remind you of those sad, stuffed products from the 1950s.

Like it or not, garlic sprouts in winter. When you cut the garlic clove, take out the green sprout before using, or better yet, look for Argentine garlic, which is grown in that country’s summer season. In any case, always try to find garlic that comes from the southern hemisphere.

Red and yellow peppers don’t remind you of those sad, stuffed products from the 1950s.

Don’t refrigerate any fruit (especially bananas!) except apples, unless the fruit is cut up and mixed together for fruit salad (macedonia in Italy, macedoine in France). Sprinkle fruits with lemon or lime juice so they retain their color.

Lemons may be kept for months in a fridge. Take it from someone with a sweet little tree that puts out hundreds of seedless lemons twice a year. You can only make so many jars of lemon curd, chutney, and so many gin and tonics, but a bit of lemon juice goes into just about everything I cook to balance the final flavor, be it sweet or savory.

I make guacamole in avocado season and freeze it for whenever I like. Put it in an airtight container, cover the surface with plastic wrap and you’ll have lovely, fresh guacamole any time of year. Great for no-work make-ahead party food.

Make all meat stews a day or two ahead — boeuf bourguignon, cassoulet, ragout, peposo, bolognese, and so on. Meat sauces or stews are so much better after a little repose, just like the cook.

Ditch your dried herbs, especially the ones that are now available fresh in most supermarkets. In a sunny spot, grow a few small pots of basil, parsley, and cilantro, or your favorite fresh herb.

Scratch the garlic salt forever! Spices and herbs are two different things. Spices, such as the ones for curry, are usually dried unless you have fresh curry leaves, or fenugreek growing in the hills, as it does here in southern France. But herbs are best used fresh, period.

Chili powder is okay, and sweet paprika is great for sprinkling on top of dishes for color, but try to use fresh pepper corns instead of ground pepper. I also mix a couple of shakes of paprika with the flour, salt, and pepper mix used in so many recipes.

That same flour mix with a few spoons of parmesan added works wonders on whatever you are tossing in it.

The mold that forms on stored foods often serves as protection for what’s underneath.

I never, but never put chicken in a sauce for pasta. It seems sacrilegious somehow. Chicken in pasta sauce appears only outside Italy, just as goat cheese and crème fraiche appear on what’s sold as “pizza Margarita” in France. I’m a purist for pizza, can’t change, but I’ll certainly taste anyone’s version. Just keep the chicken for fried chicken, chicken parmesan, or curried chicken salad and you won’t hear a peep out of me.

Sell-by dates are fine to consider, but many foods are perfectly good a week or two later, such as yogurt, sour cream, cottage cheese, and other dairy products. A good sniff will ascertain whether to toss it or not, and even the mold that sometimes forms on stored foods can be considered as protection for what’s underneath. A good example is the mold seen on some jams and jellies. Remove it along with a thin layer of the stuff underneath, and what you have left is usually perfectly fresh. If it’s moving, toss it.

My soup concoctions are just that. Anything goes, except maybe leftover chocolate truffles or ginger cookies. Wait a minute, ginger cookies might be just the touch for a Southeast Asian potage.

I love classics, and cook many, but I experiment and tweak all the time. You never know what dib or dab of something is going to make your sauce sing.

But I have no doubts whatsoever that green bell peppers simply can’t carry a tune.