By night in France 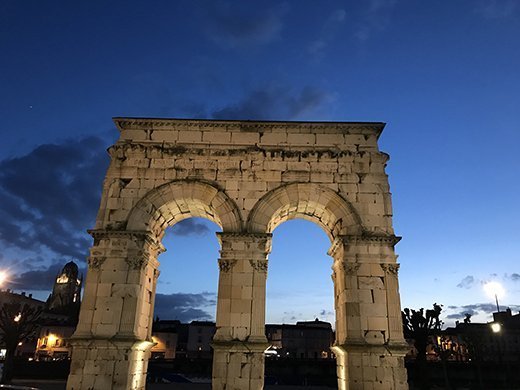 A Roman-era Germanic arch photographed at dusk. Author photos.
A

year ago in France I drove all night from Saintes to Lascaux, through sleeping villages with lit-up statutes of pilgrims, past castles with internal waterfalls, and through enchanted forests where deer ran free.

Another night stretch took me from the Charante-Maritime region, through the vineyards of Bordeaux and the Perigord-Limousine Forest, to the Dordognes. For me, these nocturnal time travels were the stuff of fairytales.

My car accident  had set my schedule back by an entire day. Not only did I have to stay overnight in Les Sables D’Olonnes on the coast of the Bay of Biscay, but the next day I had to sit around waiting for a driver to take me all the way back to Nantes, where I was to pick up a new car for the rest of my trip.

By the time I got that car, it was late afternoon, which meant I had a half-day less to get to the cave paintings in Lascaux. It also meant I had to drive all the way back to Paris in time to see Arcade Fire in concert at the AccorsHotel Arena.

I sped along the highway wondering whether I would drive down to Bordeaux on a fast superhighway and then cut back east to Lascaux, or transect the countryside over two-lane highways through a dozen small towns and villages.

It was clear I’d have to drive half the night through the vast territory of the Nouvelle Aquitaine if was to make in time for a morning tour of the Caves of Lascaux —before heading through Limoges, then into central France, and finally to Paris and the concert.

The route I chose turned into a long ride into the night that would take me from 2,000-year-old Gallo-Roman ruins through the rustic vineyards of unnamed towns to the cave paintings of ancestors who walked the Earth 20,000 years ago.

I sped along the highway wondering whether I would drive down to Bordeaux on a fast superhighway and then cut back east to Lascaux, or transect the countryside over two-lane highways through a dozen small towns and villages.

I decided to stop in Saintes, knowing little about the town other than it had an intact Gallo-Roman amphitheater and the Basilique Saint-Eutrope. Also, it was getting close to dinnertime and I was hungry.

I parked near the Basilique and walked down a terraced stairway to a path that led to the amphitheater, my eyes on a group of adolescents sitting on a stone wall.

Alas, the amphitheater gates were closed but I got to walk around and get some good photos. Now I was good and hungry.

I drove through the downtown area, over the Charante to the right bank where I hoped to find a good restaurant. After parking I walked past several places but nothing grabbed me. I wandered down an alley until I found myself at the river’s edge with a great view of the Arch of Germanicus in front of me, all lit up in the now-darkening sky. The Cathedral of St. Pierre glowed in the background.

Walking back up the alley to my car I heard music. I followed it to a door painted in  claret, a jonquil sign overhead that announced the establishment  as “L’escarmouche musicale.” I entered and heard the most beautiful live music being played by town elders, a younger man beating on a drum and singing. A lively crowd sang along and danced.

It was mid-April, and the place still had a Christmas tree all lit up. There was a stuffed lion draped over the mantel. In the back near the bar were tables with board games and puzzles. I ordered a beer and asked for a menu.

“We have no menu tonight. Only chili,” said the proprietor. And even then, he was not sure if there was enough chili left for a serving. I said it didn’t matter. I was happy to sit and listen to the music.

It was one of those magical, serendipitous moments when one is traveling alone and stumbles upon something you don’t find in the tour guides. Townsfolk singing with gusto, dancing with each other and laughing as the quartet continued to play French gypsy music. The proprietor found a bowl of chili for me. I ate it with great relish, and after a while I wandered back into the night.

By now it was 11 p.m. and too late to find a place to sleep for the night. My fate was sealed. I would drive on.

Night driving opens a window into a country’s parallel realm.

I headed out of town toward Cognac, got turned around at a roundabout and wound up in the middle of Pons, which might be best known for its roundabout full of brass statues of pilgrims heading god knows where. They were no help to me. I would later discover that I had crossed one of the many paths of the pilgrimage to Santiago Compostela, or the camino de Santiago, the way of Saint James. They seemed to be frozen in time and headed in one direction, toward Galicia and the future promise of Heaven. I on the other hand, was headed back in the opposite direction, toward some prehistoric time where our ancestors scribbled messages on the walls of caves.

From Pons, I found my way to the hill town of Barbezieux-St. Hilaire and on hairpin turns through the southwestern edge of the Périgord Forest, tails of deer flashing in my headlights. The drive took twice as long as my Google maps said it would take.

I eventually made it to Cubjac where I found a parking area near the Auvézère River and slept for an hour under a brilliant full  before driving the rest of the way to my ultimate destination.

By the time I reached Lascaux there was a faint light in the east, and mist in the air. I found the parking lot of the Lascaux caves, parked the car and fell asleep for a couple of hours. When I awoke, I ventured into town, found a tabac that was open and serving coffee and croissants.

Nourishment in hand, I headed back to the caves, watching as the parking lot slowly filled up with visitors and waited for the first tour of the day, still dizzy and buzzing from my wild night-time ride.